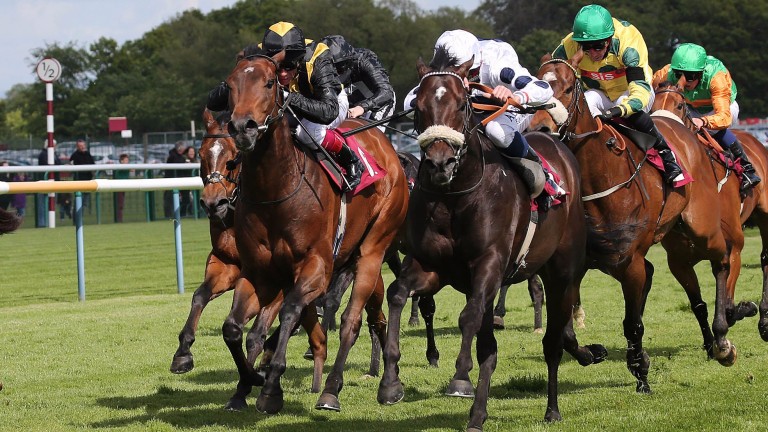 Ed Vaughan is hoping to claim this valuable prize with the returning Claim The Roses, who is treading a familiar path from Machell Place Stables in Newmarket to Gosforth Park.

The six-year-old is among 14 entries for the £35,000 contest, but that number may diminish by post time as Examiner and Storm Rock both ran on Wednesday with the former winning and Storm Rock finishing fourth.

"We won the Seaton Delaval a few years ago with Dance And Dance when it was staged on turf and you could say we're creatures of habit," said Vaughan.

"It's always been a nice pot but wouldn't be the strongest race as many of those eligible usually run in the Hunt Cup at Royal Ascot."

Claim The Roses, who has not run since last November, did not win in four starts last season but was second twice and Vaughan thinks he has him primed to run a big race. He added: "As his rating would suggest he's more effective on the all-weather than turf. He goes well fresh and there are plenty of positives, although I don't know how his draw in stall two will pan out."

Topweight in the race is the consistent Briardale, who is dropping back in trip from 1m2f, something his trainer James Bethell hopes he can overcome.

The five-year-old, who has won two of this last three starts and was runner-up on the other occasion, goes well for his jockey here, Paul Hanagan.

Bethell said: "Dropping back in trip is not ideal, although the original plan was to go to Royal Ascot, but it went too firm. The aim now is the John Smith's Cup at York and he should run a nice race particularly if they go a decent pace. Paul gets on well with him so I'll leave the tactics to him."

Fellow northerner Brian Ellison fields the easy-to-spot Top Notch Tonto, who has been through a few hoops already this season and now switches to the all-weather for just the second time. Ellison said: "He's in great form and the ground was too quick for him last time. I gather his mother won a lot of races on the all-weather so it'll be interesting to see how he gets on."

The Tin Man pairing of James Fanshawe and Tom Queally are back for more cash with Replenish, who is a previous course and distance winner. Queally said: "James has a great record at the track and the horses are running well so we're hopeful of a nice run from stall ten."

Also travelling up the A1 from Newmarket is Chris Wall's Mountain Rescue, who is out to relieve sponsors Betfred of some place money according to his trainer. Wall said: "His best form is on the all-weather but realistically he needs to improve to win. If he ran to his best we could nick some place money."