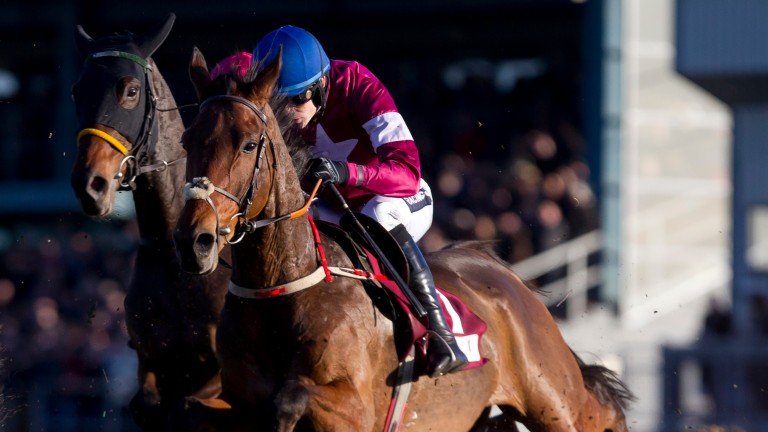 Valseur Lido and Ruby Walsh on the way to victory in the JNwine.com Champion Chase at Down Royal
Patrick McCann
1 of 1
By David Jennings 6:55PM, NOV 5 2016

Don Cossack is still the big-name striker on Gigginstown's Gold Cup team, but they now have a suitable substitute to spring from the bench if he does not return to full fitness.

Indeed, so impressive was Valseur Lido in winning the first Grade 1 of the jumps season he will probably force his way into the side next March either way.

It was the tale of two ex-Willie Mullins inmates. One announced himself as a genuine Timico Cheltenham Gold Cup contender and the other all but erased himself from that picture with a shocking display.

It was a dazzling display from last year's Ryanair Chase runner-up, who was slashed from 20-1 to 12-1 by Ladbrokes for the Gold Cup and was cut to 8-1 for the 32Red King George VI Chase by the same firm. BoyleSports also make him a 12-1 shot for the Gold Cup, while Paddy Power and Betfair go 16-1.

Don Poli produced the type of effort that will make his nasty nickname stick. Don Slowly, as he has been christened by some, gave Barry Geraghty a sickening six minutes. We know he can race lazily but this took the biscuit altogether, as he began to back-pedal rapidly from over a mile out.

It was left to the ever-reliable Silviniaco Conti to put it up to Valseur Lido, but once Walsh moved upsides Noel Fehily approaching the second-last it was all over bar the shouting. Two fluent leaps sealed the deal.

'That was just super'

“That was just super,” smiled trainer Henry de Bromhead, who went on to reveal details of a smashing piece of work Valseur Lido did during the week.

“He'd been working really well, to be honest. He's new to the yard and I didn't have him long enough to know for sure, but he did a piece of work the other day that really excited me. Three-milers do not usually have many gears, but he showed gears that most staying chasers do not have. It was so exciting to see it.”

Valseur Lido has been tried over three miles or further only four times. He won the Grade 1 Champion Novice Chase at Punchestown, departed at the last in both the King George and the Irish Gold Cup last season – having cruised to the front and looked the most likely winner in the second of those contests – and this romp was his latest try at the trip.

“It's lovely to get that done and hopefully he'll be okay after it. I'll speak to Michael and Eddie [O'Leary] to see about plans.

"I wouldn't imagine he'll be dropping back down in trip after that today but he's still new to me and Ruby, Eddie and Michael know him better than I do. For me to start telling you what he's going to do next or where he'll go would be stupid.”

It has been a remarkable resurgence from De Bromhead over the last few months. One door might have shut when Alan and Ann Potts removed their horses from his Knockeen yard but a giant one opened when Gigginstown increased their investment with him.

“Ann and Alan [Potts] were fantastic supporters of ours for years and we had some great times together. That chapter of my life was brilliant, but this is a new episode now. The O'Learys have been very supportive. I'm very lucky to be in the situation I'm in,” De Bromhead said.

Walsh would be unbeaten on Valseur Lido but for the aforementioned tumble in the Irish Gold Cup last February and he looked in tandem with the seven-year-old as he cut through the pack and went in pursuit of the front-running Silviniaco Conti. It was poetry in motion from start to finish.

Walsh said: “He jumped super and travelled super. He was going to win the Irish Hennessy when I fell off him and he was always a very very good horse. He hasn’t done anything he hasn’t done in the past.”

The next step could be the King George. Victory there would certainly be something he has never experienced but, on this evidence, he would be a big player in it.

FIRST PUBLISHED 6:22PM, NOV 5 2016
Three-milers do not usually have many gears, but he showed gears that most staying chasers do not have. It was so exciting to see it

Red-hot Mike O'Connor proves the master once again for in-form Henry de Bromhead Fairytale for Cummins as apprentice rides first Irish winner on 50-1 outsider This is all about Samcro - but will the one-time future megastar battle again?