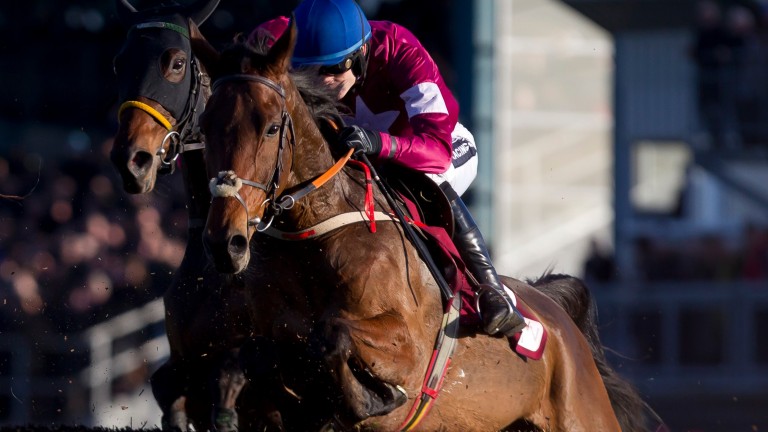 Valseur Lido: the classy chaser looks set for a spell on the sidelines
Patrick McCann (racingpost.com/photos)
1 of 1
By David Jennings 4:29PM, DEC 27 2016

Britain has a beast, now it is up to Ireland to come up with something to tackle that beast. Thistlecrack is as short as 4-5 with Ladbrokes for the Timico Cheltenham Gold Cup following his demolition job in the King George, and there is a gap in the market for an Irish challenger to deliver a serious statement of intent.

Could it be Valseur Lido? What a present he was for Henry de Bromhead in September when he arrived at the yard after Gigginstown and Willie Mullins had their spat over training fees.

He looked a genuine Gold Cup contender last season, only for his owners to insist he run in the Ryanair, but on the evidence of his emphatic victory in the JNWine.com Champion Chase last month, the Gold Cup surely has to be the aim this season.

Valseur Lido was pretty much flawless at Down Royal. He was neat and tidy over his fences, eased into contention with a mile to race and put the race to bed in a couple of strides in between the final two fences. Silviniaco Conti was 11 lengths back in second. That form is rock-solid.

Djakadam has been a rock-solid performer at the highest level for some time and it is hard to believe he is still only seven. He has finished runner-up in the last two Gold Cups, getting closest to Coneygree in 2015 and chasing Don Cossack all the way up the home straight this year. 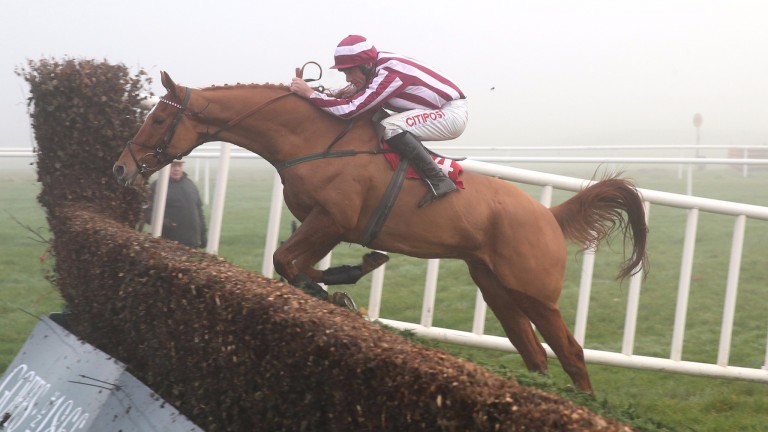 Zabana: "He's very good now and he knows he's the king"
CAROLINE NORRIS
He has been there, done that and almost bought the T-shirt. Maybe this will be his season and victory here would certainly enhance his chances of making it third time lucky in the big one come March.

He made a winning return in the John Durkan over an inadequate trip, so everything appears in place for a bold showing.

Don Poli was widely considered one of Ireland's big Gold Cup hopes when winning this race in workmanlike fashion last season. His career has taken a turn for the worse since, and his dismal Down Royal display would hardly inspire confidence, but trainer Gordon Elliott says he has seen improvement at home, so maybe it is too soon to write him off.

The second string to Elliott's bow is Outlander, another who used to be trained by Mullins.

Like Elliott, Jonjo O'Neill is double-handed with More Of That, the only horse to have beaten Annie Power when she has stood up, and BetVictor Gold Cup winner Taquin Du Seuil.

And don't forget Zabana. He gained compensation for his mishap at the start in the JLT Novices' Chase in a Grade 1 when winning at the Punchestown festival and looked as good as ever when beating Kitten Rock at Gowran Park last month.

This is a showdown to savour.

Gigginstown are chasing a hat-trick in the Lexus, having won it in 2014 with Road To Riches and again last year with Don Poli – both of whom are back for more.

Gordon Elliott, trainer of Don Poli and Outlander
Don Poli ran a shocker at Down Royal and you just couldn't have any confidence now. Having said that, we think he's in great form at home and if he hadn't run so poorly up north we'd be fancying him to run well. Outlander ran a career-best at Punchestown in the John Durkan last time. He's come out of the race in great form and we can't wait to run him as he'll love the ground.

Enda Bolger, trainer of Gilgamboa
It's some race, seriously, seriously competitive, and we're just hoping he might be able to pick up some place money. What happened last time was a pity, but he seems in good form.

Noel Meade, trainer of Road To Riches and Wounded Warrior
Road To Riches is as ready as he can be to start back. He had a little operation on a kissing spine since we last ran him and it's been a bit of a rush to get him here. If it was heavy I probably wouldn't run him, but with the ground so good I thought it would be a nice place to start. He's in great form and I think he can run well. I always felt Wounded Warrior would be better on softer ground but Eddie [O'Leary] was keen to run. He's run well on better ground in the past, so we're letting him take his chance.

Mouse Morris, trainer of Smashing
He'd need overnight rain. His best form is on softer ground and it's quite quick. We'll make a definite decision about his participation in the morning.

Henry de Bromhead, trainer of Valseur Lido
I'm delighted with him and this has been the plan. It goes without saying we were thrilled with him at Down Royal and everything has gone well since. It's a really hot race but my fella seems in great form.

Andy Lynch, trainer of Zabana
Both Laura [McDermott] and Gareth [O'Loughlin] know him better than anyone and when they say he’s well or needs backing off, they’re always right. He's very good now and he knows he’s the king. He’s as good as he'll ever be at this time of year, but it’s all about the ground for him and it should be okay. He's a stronger horse this year and he has built up very well.

FIRST PUBLISHED 6:00PM, DEC 27 2016
I am delighted with him. This has been the plan. It goes without saying that we were absolutely thrilled with him at Down Royal