Uxizandre the thrill injured Geraghty will miss most 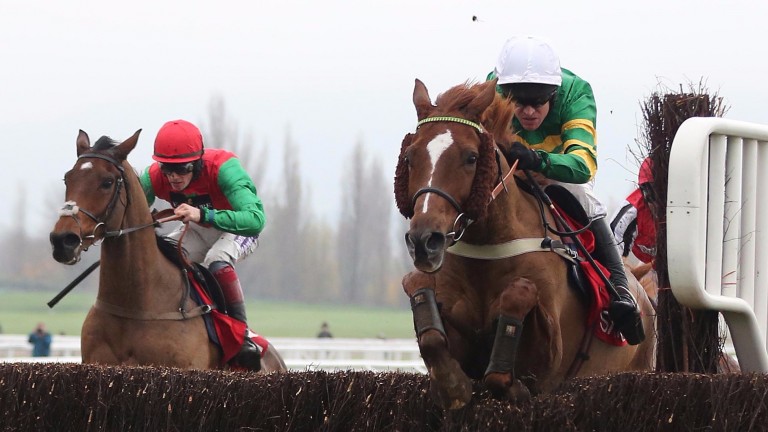 Barry Geraghty is as disappointed at missing the ride on Uxizandre in the Ryanair Chase as much as any of the shorter-priced Grade 1 fancies he would have been on board this week, but for the lung and rib injuries he sustained on Charli Parcs at Kempton last month.

"Uxizandre is a thrill-a-minute and has so much scope and so much enthusiasm," he explained on Sunday, while convalescing at home with his wife and three children.

"Yanworth or Buveur D'Air will both be well fancied and also Unowhatimeanharry, Defi Du Seuil and a lot of the handicappers. I'll miss riding them all, but Uxizandre is just great fun to ride, and I think he'd have a good chance too."

This is going to be a difficult week for Geraghty, who has 34 festival winners to his name and has never drawn a blank since Moscow Flyer got him off the mark in the 2002 Arkle.

He admits he will have "itchy feet" resting at home while others step in upon all of the choice rides he was looking forward to for boss JP McManus. However, he will be "cheering them all on", while hoping there is plenty to come still by the time he gets back in the saddle, hopefully at Aintree next month.

He said: "It will be hard sitting on the sidelines but I'm fairly hopeful of being back for Aintree. The three or possibly four ribs I broke are doing okay, but I had quite a significant laceration to a lung; that's what needs more time."

Andrew Thornton, also sidelined but who will be at Cheltenham for BBC Radio 5 Live, has declared himself "three-parts sound again", but that's not to say he is close to making his return.

Thornton, who was injured after dismounting from his 1,000th winner at Wincanton on Boxing Day, said: "I had my anterior cruciate ligament reconstructed on January 24, more than six weeks ago, and that was my second operation, as I'd had the cartilage operated on on December 28.

"I'm three-parts sound again, walking unaided and beginning to put some weight through it, but I'm told it's going to be six months from start to finish before I'm riding again."

He remains adamant, however, he will be back, and said: "It's frustrating, but you deal with it and I'm definitely coming back. End of."

Alain Cawley hopes he will be returning much sooner than Thornton, although having been out of action since dislocating both shoulders at Kempton in October, his rehabilitation will have taken just as long.

Cawley, who has been keeping himself busy and learning another side of the business at Fergal O'Brien's between regular sessions at Oaksey House, said: "There's a chance I might be back for Aintree.

"When I saw my specialist a week ago he was talking about another four weeks or so before I'm riding again, and that would fit in with Aintree. I'd love to ride Richard Hobson's bumper mare Dame Rose there, but it's not all about Aintree, I just want to get back, simple as that."

Cawley, whose last significant injury had been in 2009, added: "My right shoulder was right by Christmas time, but the left one wasn't simply dislocated, I fractured it and suffered 80 per cent nerve damage. It's getting there now."

FIRST PUBLISHED 2:46PM, MAR 12 2017
Uxizandre is a thrill a minute and has so much scope and so much enthusiasm. He's just great fun to ride, and I think he'd have a good chance too