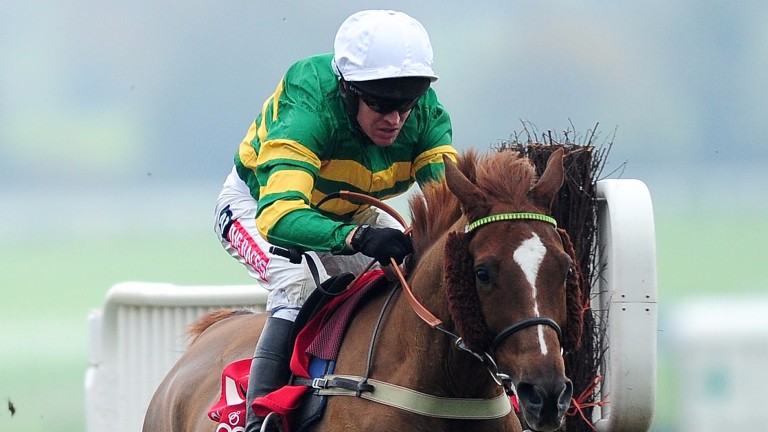 Uxizandre: on course for a return to the Cheltenham Festival after his second in the Clarence House Chase on Saturday
Dan Mullan
1 of 1
By Bruce Jackson 5:24PM, JAN 29 2017

Alan King is looking forward to some big spring targets after a successful Saturday at both Cheltenham and Doncaster.

While Uxizandre was not one of his three winners, the nine-year-old's second in the salvaged Grade 1 Clarence House Chase in his first start since winning the 2015 Ryanair Chase took pride of place.

"He exceeded expectations and it was like having a winner," said King on Sunday.

"Barry gave him a wonderful ride and said he had a blow at the top of the hill with him. He had a right old blow after the race and will come on a huge amount for the run.

"We think he's a better horse on better ground so that added to his peformance. We will give him another few days and you won't see him until the Festival.

"He's still in the Betway Queen Mother Champion Chase but it's more likely to be the Ryanair again - we will keep the option open."

Smad Place, third in the Cotswold Chase after a bold front-running effort to repeat last year's win, will go straight to the Timico Cheltenham Gold Cup.

"I was very pleased with him and he jumped super. There's not much else for him so he will go straight to the Festival."

King added: "He got a penalty for the Betfair Hurdle. The race is only a fortnight away but he could run there."

Ziga Boy, who made history with back-to-back wins in the Sky Bet Chase, has earned himself an entry in this year's Randox Health Grand National at Aintree.

King said: "He will be borderline getting a run and I don't know whether he's going to be high enough having won off only 137 on Saturday."

Ziga Boy, the first horse to win this historic race previously known as the Great Yorkshire Chase, could try to improve his chances of another run over the Aintree fences back at Doncaster.

The eight-year-old grey, owned by Axom, had an unfortunate first sight of the famous fences, being hampered and unseating his rider at the first in the Becher Chase in December.

FIRST PUBLISHED 5:24PM, JAN 29 2017
Barry gave him a wonderful ride and said he had a blow at the top of the hill with him. He had a right old blow after the race and will come on a huge amount for the run