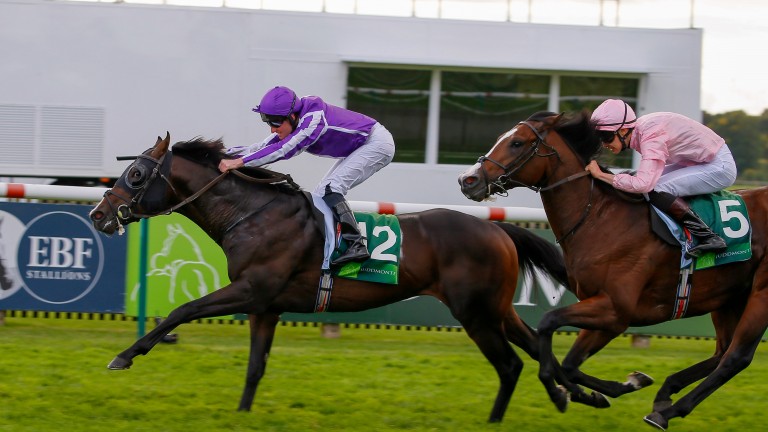 US Navy Flag: gets the better of stablemate Fleet Review
Mark Cranham
1 of 1
By Bruce Jackson UPDATED 6:52PM, SEP 30 2017

Aidan O’Brien reached another landmark when US Navy Flag gave him a 20th Group 1 success of the year and also showed
how he has altered the way juveniles are campaigned.

US Navy Flag and Fleet Review, with 11 races under their belt already, fought out the finish of the Juddmonte Middle Park Stakes with the former prevailing by half a length under Seamie Heffernan.

Sioux Nation, Ryan Moore’s mount and also raced half a dozen times was a never-dangerous sixth, as US Navy Flag led home the one-two down the middle of the track with inside rail-runner Cardsharp third for the fourth time this year in his seventh start.

The Ballydoyle trainer seems far from certain to let US Navy Flag furl up his banner for the season as he has another Group 1 target in mind, so no wonder Paddy Power cut him to 5-4 from 5-2 to break Bobby Frankel's top-grade record of 25.

"He's a brother to Roly Poly out of a Galileo mare," said O'Brien. "He takes his racing well and has progressed with every run, There is nothing to say he won't get seven furlongs so we'll have a look at the Dewhurst.

"He's a hardy horse and when you have one like that you can keep going with him. I wouldn't rule out the Dewhurst and Seamie said he really wanted it."

Heffernan added: "It was no surprise he ran well – I thought Ryan was my danger but his horse [Sioux Nation] is big and a little bit weak.

"This lad is out of a Galileo mare and that's what kicks in. The blinkers help him focus and makes the jockey's job easier. I'm not surprised but I'm grateful he won!"

As the betting suggested in making Beckford the 4-1 favourite this was one of the most open Middle Parks in years and going into the final two furlongs it looked like being a bunched finish with eight of the 12 runners line abreast in what looked more like a cavalry charge.

The two principals, who didn't look exactly at ease running down into the Dip, quickened up takingly on the rising ground to put distance between them and the bunched finish for the minor honours.

The best big-race reports on racingpost.com