Aidan O'Brien moved one victory short of Bobby Frankel's world record for Group or Grade 1 wins in a year with a Dewhurst Stakes one-two-three-four that is unprecedented in the modern day.

In an awesome demonstration of his Ballydoyle stable's strength in depth he swept the board as US Navy Flag led home Mendelssohn, Seahenge and Threeandfourpence - and not one of them started favourite.

Expert Eye, sent off 4-7 favourite, finished last, unable to match the pace of US Navy Flag, who made all the running under Ryan Moore to become the first horse since Diesis in 1982 to complete the Middle Park-Dewhurst double.

The two-year-old track record over 7f also fell as US Navy Flag's time of 1m 22.37s shaved 0.02s of the previous best which had stood for nine years.

"He is a Middle Park winner and I think he was overlooked probably," said O'Brien. "It was always very possible it was going to happen. He is a full brother to Roly Poly. She was good over six furlongs and was better each time she stepped up in trip. He is the very same, a tough solid horse with plenty of tactical speed.

"It is unusual and rare [to win the Middle Park and Dewhurst]. We are lucky to have a good colt like him who has pace enough for six and has a good chance of getting a mile."

US Navy Flag: Dewhurst winner has options at three
Martin Lynch (racingpost.com/photos)
Moore and O'Brien were winning their third successive Dewhurst together and the jockey marvelled at the trainer's skils.

"All credit to Aidan, to have the first four home is a great achievement," he said. "All four have taken a big step forward and I would expect them all to be even better next year.

"US Navy Flag has got better through the year, we've learnt about him. He's just like his sister, he's a very honest horse who keeps improving and it's hard to know just how good he could be.

"He showed he gets seven furlongs well today and I have no doubt that he will get a mile next year."

O'Brien hinted US Navy Flag could be included in his Breeders' Cup team at Del Mar next month, by which time he may have at least matched or even bettered Frankel's score of 25 top level triumphs.

Depending on results in Canada on Sunday night, where the trainer has two runners at Woodbine, the record could fall at next weekend's Qipco British Champions meeting at Ascot.

"We would be very honoured," he said. "It would be a massive achievement for everyone. We don't think about it as a long term thing. We take each race and each day as it comes. It's a big team effort."

What do you make of the 2,000 Guineas market after the Dewhurst?

Tom Park, Ante-post Focus
Given how comfortably US Navy Flag won, it is surprising to see Ladbrokes go 10-1 about the son of War Front. However, Expert Eye clearly didn't run any sort of race – nowhere near the level he did at Goodwood, which is still the best juvenile performance of the season in my opinion. That said, you would have to be very brave and forgiving to invest in Expert Eye after that performance. There is clearly no stand-out juvenile colt at the moment and it is probably wise to wait until the new season before investing in any ante-post market. 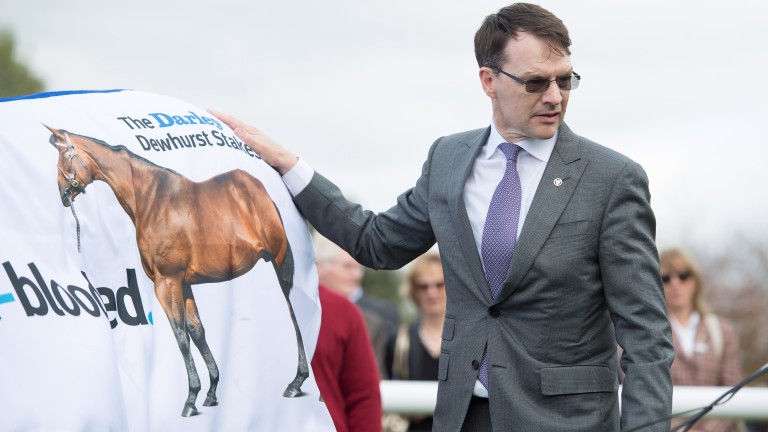 Aidan O'Brien: achieved a 1-2-3-4 in the Dewhurst
Edward Whitaker
David Baxter, Juvenile Judge
I did not rate the Middle Park form that highly, so I was left eating a nice slice of humble pie as US Navy Flag once again came clear on the Rowley Mile. The stands rail was the place to be all afternoon, so it could be that US Navy Flag was in the right place at the right time, but he did win emphatically. He might be a 2,000 Guineas winner, but he strikes me as a more likely winner of the Irish version of the Classic. Expert Eye's run was too bad to be true, so I'd like to see him take in a trial next spring to restore his reputation.

The most stunning clean sweep by a trainer in any top-level race remains Michael Dickinson's feat of having the first five in the 1983 Cheltenham Gold Cup.

The only time a trainer has had the first four in a British Classic was when James Croft of Middleham monopolised the St Leger in 1822. Croft's winner, 200-1 shot Theodore, is still joint-holder of the record for the longest-priced winner of any Flat race in British racing history.

In Group 1 races since the European Flat Pattern was created in 1971, Aidan O'Brien's Dewhurst feat was preceded by that of Alduino Botti, who had the first four in the 1981 Oaks d'Italia at San Siro, headed by Val D'Erica.; he had five of the six runners.

Chris Waller, champion trainer in Sydney, had the first four in Australia's premier mile race, the Group 1 Doncaster Mile Handicap at Randwick, in April 2014, led home by Sacred Falls. Later that year Waller had the first six in the Group 2 Chelmsford Stakes at Randwick, won by Hawkspur.

O'Brien himself has had the first three in several Group 1s, notably the Arc last year.

FIRST PUBLISHED 3:08PM, OCT 14 2017
He is a Middle Park winner and I think he was overlooked probably