Upswing on a roll and bidding for a hat-trick 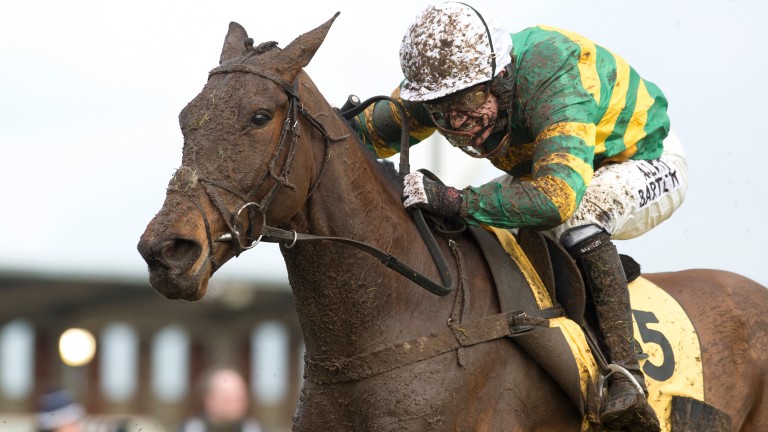 Upswing and Sir AP McCoy in rather muddier conditions than are expected at Perth
Edward Whitaker
1 of 1
By Graham Dench 9:11AM, JUN 4 2017

Upswing bids to complete a hat-trick here, just as his stablemate Water Font did 16 years ago.

In 2001, Water Font and Richard Johnson came here on the back of wins at Newcastle and Perth. The JP McManus-owned Upswing has won at Ffos Las and Cheltenham, beating Belmount in a decent handicap over three and a quarter miles at the latter track's good April meeting when ridden by today's jockey Aidan Coleman.

Without question, however, this is a much hotter race than it was all those years ago. Competition is tougher across the board than it was then, particularly in the summer months, and today's £30,000 prize has attracted runners from many of the top names in the sport, including Britain's champion trainer Nicky Henderson and Gordon Elliott, who was only just thwarted in his bid to win the Irish title.

Nicky Richards, who won this last year with Gold Futures, has realistic chances this time with both Cultram Abbey and Looking Well. Tom George, who saddles Roc D'Apsis, enjoys his visits here and won two years ago with Kilbree Kid. Gordon Elliott (Rightdownthemiddle) is another recent winner.

Nicky Henderson, trainer of Volnay de Thaix
Everyone deserves to have a crack at a Gold Cup and this is his opportunity. He ran a nice race on his comeback at Sandown but less well at Haydock but a few things have come to light since then and he schooled well the other day. Off his rating, there are very few races for him at this time of year.

Jennie Candlish, trainer of Beeves
He's won his last two which means he's on a career high mark now which will make it tough but he goes there with a chance.

Jonjo O'Neill, trainer of Upswing
He travelled and jumped well at Ffos Las but the good ground is the real key to him as he tends to struggle if it gets too soft. In the main his jumping is pretty good and he's the type to keep on the go over the rest of the spring and into the summer.

Nicky Richards, trainer of Cultram Abbey and Looking Well
They are two nice horses. We've kept Cultram Abbey for this since he was second at Perth five or six weeks ago, when he would have won in another 50 yards. I half hoped the weather would break, but it should be nice ground. We've always thought Looking Well was a good horse, but he's been difficult to train. He's in good fettle now though, and if he gets a good trip round he could run a very good race.

Nigel Twiston-Davies, trainer of Ballykan
He's a bit exposed but always runs well at the track.

Tom George, trainer of Roc D'Apsis
We've kept him for this since he won at Kempton and Perth is a similar sort of track, so he should have a decent chance.

Nigel Hawke, trainer of Lord Ballim
He has plenty of confidence now and settles much better these days. Perth is a long way to come but the prize-money is very good and he has winning form at the track.

Evan Williams, trainer of Aerlite Supreme
He's very tricky, but he's in much better form now than he was and he's still very well handicapped on some of his best form. I'm not certain he stays this far, but he has no weight and it's worth having a shot at a prize like this.

FIRST PUBLISHED 6:00PM, JUN 3 2017
Good ground is the real key to him as he tends to struggle if it gets too soft. His jumping is pretty good and he's the type to keep on the go