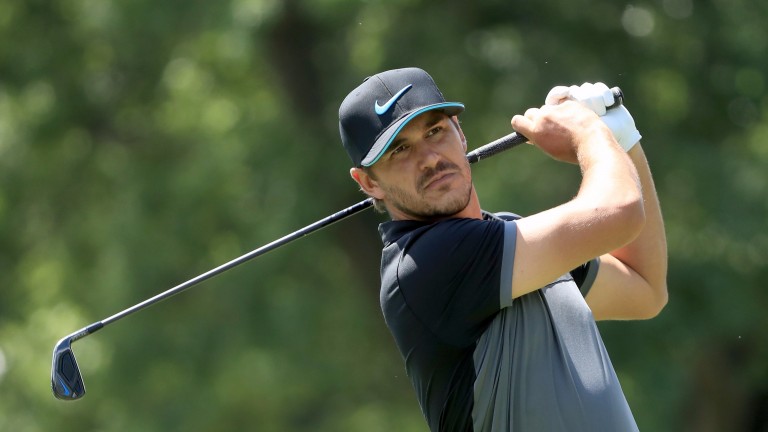 Positive mental attitude. PMA. I am continuing to do everything in my power to adopt a PMA - the benefits of a PMA are recognised the world over - and I have been fighting against my natural instincts in a bid to maintain a PMA over recent weeks.

My default setting is more PMT – I wrestle with my hormones and possess a mood swing which could provide inspiration for the creation of the most spectacular ride in the history of Alton Towers. Board the Mood Swing if you dare!

I have literally been slapping myself in the face whenever gloom has threatened to descend of late, though, and forced a smile. I follow the smile with a funny comment, then another one if possible, then I do a little dance, blow a raspberry or two, and conclude with: "Oh, we have a laugh, don't we? It's all good fun."

If it becomes my catchphrase, then wonderful. In fact, I would happily have as my tombstone epitaph: Oh, he had a laugh, didn't he? It was all good fun.

I have come to accept the employment of a permanent PMA, even when it has to be breathlessly ripped from the bowels of the most exhausted, tormented, bewildered soul on the planet. And your PMA can often have a knock-on effect, helping others perk up, too.

A game of PMA dominoes results. From nowhere, suddenly everyone is fizzing and popping like a firework display, chanting: "Gosh, life is amazing – thank you God for giving us this great opportunity to feel joy coursing through our veins."

Hopefully I can keep my PMA pumping forever, although Tuesday night tested my resolve to the full. It took me several hours to get over the injustice of the Child Genius final on Channel 4 in which a nine-year-old sweetheart called Saffy was denied the title.

Ten-year-old Rhea got to the final only after her mother Sonal called a stewards' enquiry in the semis over a supposedly questionable question that her daughter got wrong. Sonal won her case and Rhea progressed to face Saffy in what turned into a ding-dong final, eventually won 10-9 by the older girl.

Rhea's victory had more to do with the fact that she was faster on her buzzer than Saffy, giving her first crack at the spellings. No points were deducted for getting a question wrong - a serious flaw in the competition - so buzzer alacrity was key to success. Rhea had more ringcraft and competitiveness, but Saffy was as clever (or cleverer) and much nicer. I was heartbroken and close to tears.

PMA kicked back in by sunrise, though, as it had done the morning after the USPGA, for which Brooks Koepka teased me for a long way. I placed £15 on Koepka ante-post over Christmas at 66-1 with Stan James. Seven months later he went off at, yep, you guessed it, 66-1. The joys of ante-post betting, eh?

The only difference was that I backed Koepka when he was healthy - he turned up on the tee last week nursing an ankle ligament tear. I thought he had no chance and had given up on the bet, but beware the injured golfer.

Koepka entered round four in third place and finished fourth. It is revealing that my daughter has developed a habit of starting to cry whenever I put golf on TV. It could be due to the fact that she does not like seeing CBeebies taken off screen or it could be because golf typically makes Dad cry, too, so she is keen for it to be avoided.

I always wanted to be a sportsman when I was young. At the moment, I am probably going through the same emotions as a punter to that of a sportsman who has lost his form. Be careful what you wish for. I feel like a centre-forward who has gone months without scoring a goal. What is it the more predictable footy pundits say? He just needs one to go in off his arse? Yes, that's it - I just need one of my golfers to go in off my arse.

I have started the football season confidently. Manchester United should destroy Leicester City in the Community Shield today. On paper (I've heard rumour that the Wembley grass has been replaced by paper for today's fixture) the United team is different gravy to the City one, so I have punted accordingly.

If Jose Mourinho's men win in 90 minutes, my faith in footy betting will have been restored, and I will punt with renewed bullishness on the Premier League over the coming months. If the Foxes' fun continues further I will scuttle into the nearest hole I can find - like a startled rodent - and never bet on football again.

Seasonal footy accas. Would anyone fall out of a tree in wobbly astonishment (disregarding the tragic truth that hardly anyone climbs trees in leisure time these days because they are too busy Tweeting, Whatsapping, Tindering, etc.) if the following happened? Man United won the Premier League, Newcastle won the Championship, Rangers won the SPL.

I am going to feel so guilty when I pocket a bag of sand from a £20 bet on something that straightforward. I may well have to donate half of the winnings to the Retired Greyhounds Trust to help ease my sense of sinfulness.

Men who walk around shops with their top off. Absolutely disgraceful conduct. So many cretins seem to think there is no difference between a beach and a shop in terms of acceptable levels of nudity.

I was in Debenhams the other day and a bloke who must have been about 55 years of age was swaggering around the smart-casual clothing section in nothing but a pair of shorts, his moobs revelling in the freedom and threatening to knock out other shoppers.

Unless his house had just burned down and destroyed all his shirts while he was sitting in his garden, on the beach, in the swimming baths or in the boxing ring (the only places where topless men are admissible), there is no excuse for such behaviour.