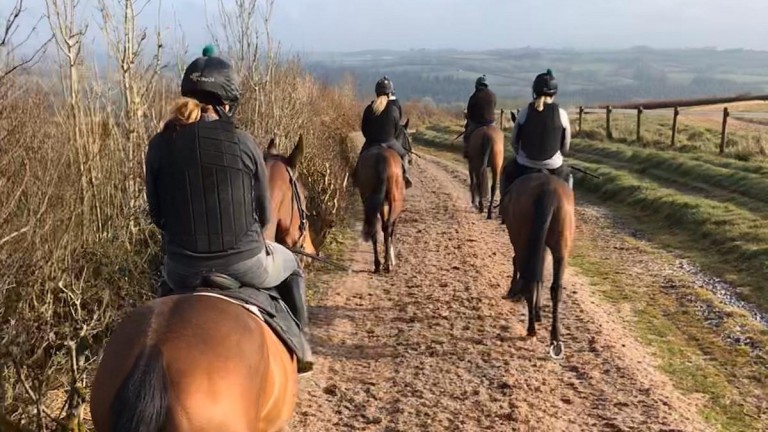 The jumps season reached its annual crescendo at Cheltenham last month but hopes of a final flourish were dashed following the cancellation of the Grand National and Punchestown festival.

There will be no jump racing in Britain until July but yards across the land are keeping busy with horses to work, young prospects to develop and a belated summer programme to look forward to.

"It feels strange to still be going to the yard while most people I know are locked down at home," says David Prichard, a 28-year-old work-rider for Nigel Hawke, who trains near Tiverton in Devon.

"You can still talk to people and there's still staff here but it feels a bit like a ghost town as you're not in close contact with each other.

"It has come at a better time for us than for Flat yards. We still have a few horses to run during the summer and have some to break in too. Nigel also bought a lot of young horses last year who are still learning the trade. That should keep us busy for a little while.

The world has been turned upside down by the #CoronavirusPandemic. With National Hunt Racing postponed until 1st July it’s a difficult time for yards across the nation. Find out how this is affecting us here at Thorne Farm below pic.twitter.com/VT5L9KYjCu

"There's no real point in getting down about it. We've all got to deal with it. We're not the only yard affected by the coronavirus and other sports will be hit worse than racing. Usually you're waiting for your day off but now we all appreciate the chance to work."

That view is shared by Rex Dingle. Despite the disappointment of his career-best season coming to a premature end, the conditional jockey is grateful of his work for trainer Anthony Honeyball.

"A few jockeys who have had injuries would be used to not being able to do a lot," says Dingle, who recorded his first winner at the Cheltenham Festival in the Martin Pipe Handicap Hurdle. We're used to being busy so not working would be a huge shock to the system.

"Your motivation to get out of bed in the mornings is usually racing in the afternoons but at the same time Anthony is schooling a lot of young horses for next season so that's given me something to look forward to. I know if I was sat at home I'd be pulling my hair out.

"My job is riding horses so I want to ride out as much as I can. I was initially gutted when racing was cancelled as I was having my best ever season but it's important to look at the bigger picture."

FIRST PUBLISHED 6:00PM, APR 5 2020
Usually you're waiting for your day off but now we all appreciate the chance to work