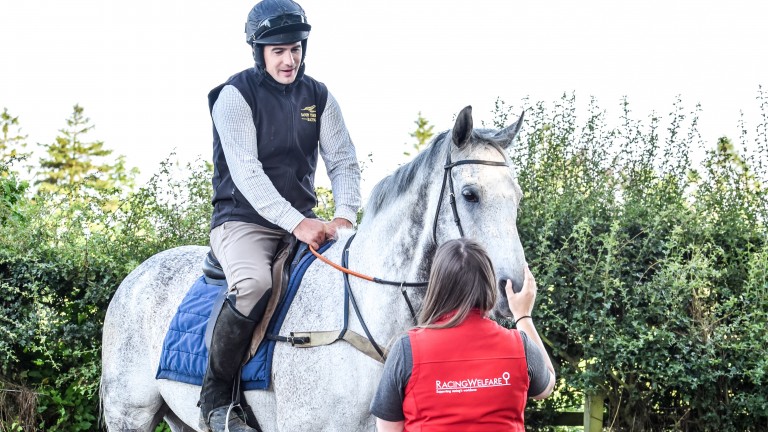 Racing Welfare are needed now more than ever as trainers, jockeys and stable staff have seen their livelihoods thrown into uncertainty
Annie Mania Photography
1 of 1
By Andrew Wilsher UPDATED 6:19PM, APR 5 2020

On Wednesday, March 18, all horseracing in Britain came to a halt.

A sport that encompasses thousands of workers – be they jockeys, trainers, stable staff, racecourse officials or stud workers – all suddenly saw their livelihoods and their futures made uncertain.

Since racing's cancellation until the end of April at least, jobs have been lost and businesses put in jeopardy, emphasised further by the nationwide restrictions on society that were brought in last month.

As a result of this unsettling climate where the future is so grey, Racing Welfare, often an unsung hero of the sport, is needed now more than ever, as the figures dictate.

Simone Sear, director of welfare, says: "We supported a total of 459 people between March 17 and April 3 – which is a lot – and the majority of our work between those dates was directly related to the coronavirus."

There is a wide variety of roles and jobs within racing, and naturally, like the rest of the country, they have all been impacted by the virus in different ways.

Racing is a unique industry and so many working within the sport have been put in unique situations, particularly those who are on casual or zero-hours contracts. Sear highlights just how broad those scenarios have been.

She says: "People have been laid off, while others have been told to self-isolate and aren't sure what they or their employer is supposed to do. Some people are feeling very anxious and worried, and it's affecting their mental health, while others are worried financially and concerned about debt and having money for rent and mortgages. A couple of people had housing that went with their jobs, and they've now lost that job. It's a whole mixture of issues."

But of course, one of Racing Welfare's largest roles comes through their support of the older and more vulnerable members of the horseracing realm. They are a community charity with plenty of retired stable staff and ex-jockeys relying on their efforts.

Now those people need that help more than ever, and the team at Racing Welfare are doing their best to ensure they know they are still there for them. They are no longer able to visit due to government restrictions, so it has been up to Sear and her team to find an alternate way to provide assistance and prevent them becoming totally isolated from the community. 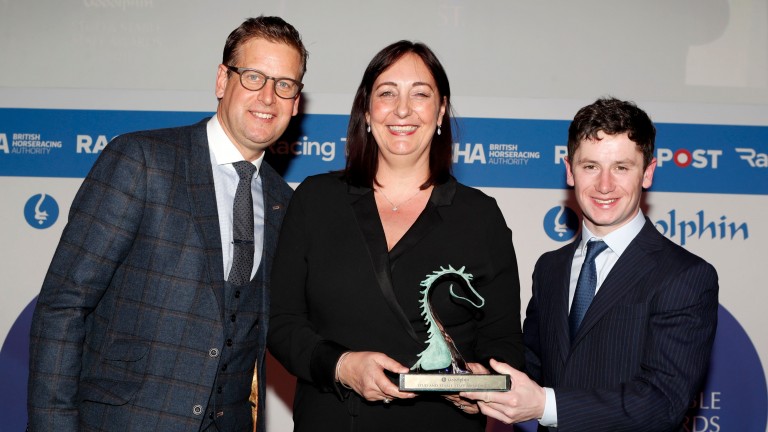 She explains: "The first task for us was calling them all. We've got around 600 people on our books who are registered with us, and those are ones who would normally be coming to things like coffee mornings to help keep them active.

"However, that number is only the people we know about. There are also a few people we're working with who we know are vulnerable, so it's about identifying all of them.

"A lot of those we spoke to were okay but really grateful for that opportunity to talk as it's going to be a really isolating time for them, and that's why it's more important now than ever for us to keep in touch with them.

"We're trying to innovate and come up with solutions on how best to do that – an example being that we've started doing our coffee mornings virtually – but at the very least we're keeping an eye that these people are okay, especially if they're cut off from their families."

The 'about' section on the Racing Welfare website notes that they offer guidance and help to all of racing's people from recruitment to retirement, and it is evident that the charity is staying true to that word.

With all of the individual cases they have dealt with so far, and those they will no doubt be looking at in the near future, you could be forgiven for thinking that the charity has a large workforce.

However, there are 48 staff members for the entire organisation, with 26 of those working in the welfare team and directly involved in providing services. 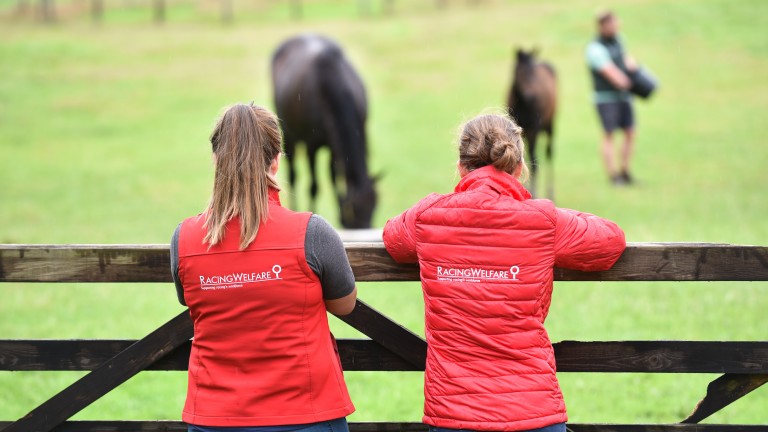 Racing Welfare consists of just 48 employees, over half of which are on the welfare team
Annie Mania Photography

It is a tough time for those employees to ensure everyone gets the help they need, but Sear is delighted with the way they have risen to the occasion.

She says: "I feel so proud of my team and the whole team at Racing Welfare, who have gone into overdrive over the past few weeks.

"It's what we're trained for, and we've invested over the years an awful lot in training and supporting our team to enable them to do this work and deal with a crisis. It's a crisis we've never seen before but this is what we do.

"It's challenging in some ways but everybody here loves that challenge and rises to it. Everyone who works for this team knows their purpose and why they do what they do. There's nothing more gratifying than being able to do that and help people."

You can feel the passion and pride in Sear's voice as she speaks about her team. She understands the severity of the situation and the strain this pandemic is putting on everyone, but all she and her team are focused on is providing the best possible assistance and care, no matter what it takes and how many people require their help.

Having started her own career as part of the Sussex Stud in the thoroughbred industry, Sear went on to work in social services before joining Racing Welfare in 2008, and becoming director in 2016.

Welfare has long been something close to her heart, as is the case for many others in the charity, and it is that passion that is driving her and so many others to go above and beyond.

"Some people are coming in from different departments and helping others and for some it's a big change because they've had to adapt and work from home, but everyone's supporting everybody else and we're coping incredibly well," says Sear.

"It's a really concerning time for everyone right across the board and it's important they know we're here for everybody. Some employers have been struggling for staff and are worried about their businesses, particularly the smaller trainers. Even those who support racing like journalists and photographers, they all fall under our remit." 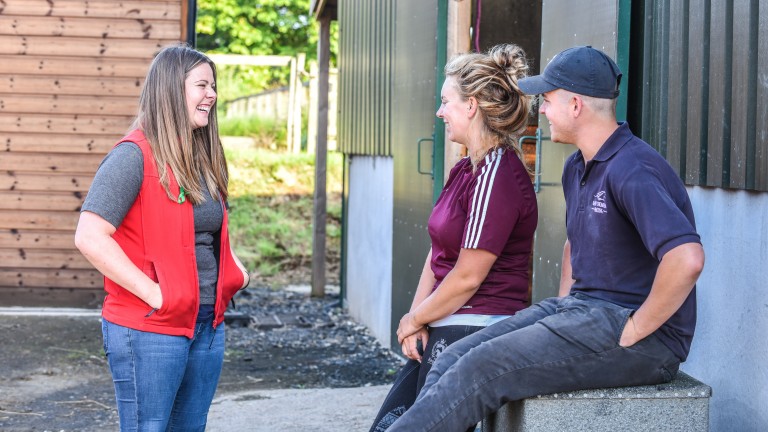 With the landscape constantly changing due to the coronavirus, it is difficult to plan for the future when there is no knowing what tomorrow might bring.

However, Sear has devised a three-pronged approach for her team in order to ensure as many people benefit as possible from Racing Welfare’s resources.

She explains: "Firstly, we want to make sure people are getting the information and guidance they need, as it's all a bit of a minefield. But we've collated it in a way that will hopefully answer the questions people have, and have been pushing it on social media and our website.

"Next, we have had to stop all yard, racecourse and stud visits, so we've formed a team to look at how we can stay connected with our community and keep that conversation going. We're still calling yards to check they're okay and maximising our telephone befriending service, which has been running for some time. If we do call someone and they're in trouble, it's about us knowing how we can help them and get support to them.

"Lastly, financial assistance is the big issue we're getting the most calls about now, and it's so important people know what we can do because we don't want anyone out there thinking they don't have enough money for food and they can't meet their basic needs. We can get financial assistance to people until they find a longer-term solution.

"We've always given help and grants to people in hardship, it's our history really, but now it's coming into its own. We have revised all our usual processes and looked at how we can be as flexible as we can. We are giving grants and these are for people in immediate financial hardship, so we can help them deal with their immediate worries and get everything they're entitled to."

Although times are hard with little respite in sight, it is now when we show appreciation and thanks for those things we often take for granted.

Racing Welfare has been a pillar in the well-being of horseracing since it was formed in 2000, and it is their generosity and kindness which has helped so many within the sport stay afloat. As they come to the forefront, it is now that their contribution will truly be valued by all those involved in the sport.

Racing Welfare can be contacted on their support line on 0800 6300 443, or via their live chat service here

FIRST PUBLISHED 6:00PM, APR 5 2020
Everyone who works for this team knows their purpose and why they do what they do. There's nothing more gratifying than being able to do that