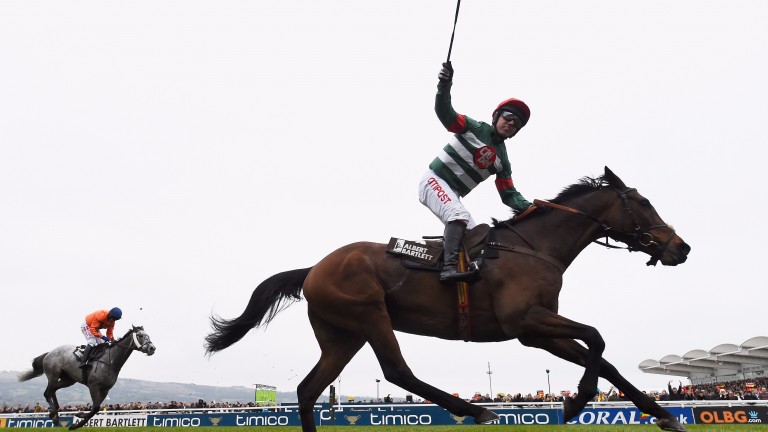 While Chepstow received a welcome dousing on Monday night, the wet front that had travelled up from the west got little further, leaving Fry's plans for what had promised to be a big Saturday for the stable in tatters.

Fry, who is also unlikely to run Thomas Brown, one of the favourites for Ascot's Sodexo Gold Cup, said: "Unowhatimeanharry is a doubt looking at the forecast. He definitely wants a bit of cut, and although they're watering at Wetherby I think it’s only to maintain good ground. He'd want slower ground than that.

"I wish they had all the rain Chepstow had, but I don’t think it got any further north than the M4/M5 interchange."

He added: "It's been an extraordinary autumn and I’m struggling to get my head around it. We’ve had these races in mind for weeks and it's now looking as if half of them won’t be running, but I guess it’s the same for everyone."

Unowhatimeanharry, purchased by JP McManus after ending an unbeaten five-race first campaign for Fry in the Grade 1 Albert Bartlett Novices' Hurdle at Cheltenham, was as short as 100-30 second favourite for Wetherby's Grade 2 behind Ballyoptic, but Fry has been forced to look again at the programme book.

He might now take him to France for his first run of the season for a Grade 1 that has been won in the last three years by Reve De Sivola, Zarkandar and Thousand Stars, and is the target of the Paul Nicholls-trained Ptit Zig.

Fry added: "Potentially there's a conditions race for him over two and a half miles at Aintree the following Saturday and I'm also giving him an entry in the Grade 1 Grand Prix d’Automne over three miles at Auteuil the same day."

Fry also has Wotzizname in the West Yorkshire Hurdle, as well as in a novice chase on the same card.

He said: "He's won two novice hurdles impressively for us. The plan was to go to Cheltenham last weekend, but I didn't want to run him on watered ground and so probably the same principle applies.

"He's in over fences because we think we're going novice chasing, but at the same time he's very unexposed over hurdles and Saturday represented a good chance to see what he could do. At this stage there's more chance of him running than Unowhatimeanharry, but I think we'll probably be looking elsewhere."

Thomas Brown, a first-time-out winner for the last two seasons, has had Ascot's Sodexo Gold Cup as his target for a while and is 7-1 co-favourite in a place, but Fry has in effect ruled him out.

Stablemate Voix D'Eau, a 16-1 chance who has already had a run, remains an intended starter, however, while new recruit Hint Of Mint could run in the William Hill Handicap Hurdle.

Fry said: "My understanding is that Ascot are trying to get it to good, good to firm in places, and most of my entries wouldn't want that. Thomas Brown would be very unlikely on the ground, but Voix D'Eau is all set to run and Hint Of Mint could go to Ascot too.

"Hint Of Mint has missed a season and has come back 12lb lower than at his peak. He's in good form and can hopefully be competitive."

FIRST PUBLISHED 2:35PM, OCT 25 2016
We've had these races in mind for weeks and it's now looking as if half of them won't be running