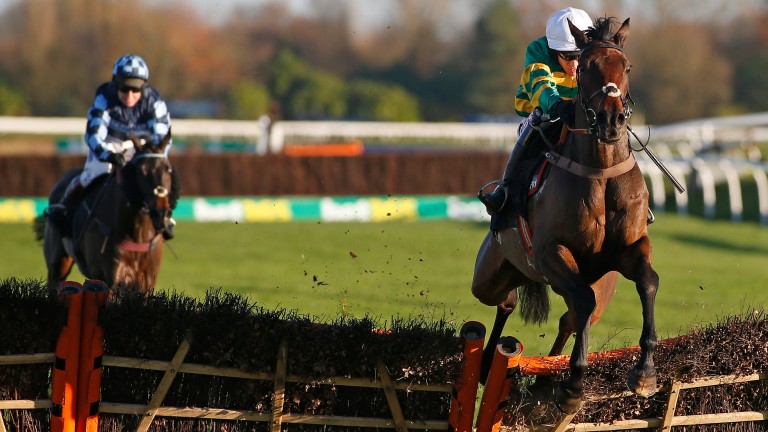 Unowhatimeanharry is a hot favourite to extend his unbeaten run for Harry Fry to seven races and cement his position as the outstanding domestic challenger for the World Hurdle at Cheltenham in March.

The eight-year-old has made extraordinary improvement since joining Fry as a maiden over hurdles before the start of last season, and his impressive Grade 2 defeat of Ballyoptic at Newbury on his return when carrying the colours of JP McManus for the first time strongly suggested that his form has been taken to a new level this season.

Having joined Fry on a mark of 123, he is now rated 165, and disputes favouritism with Faugheen at around 4-1 in some ante-post lists for the World Hurdle. He has a tough act to follow, last year's race having been won impressively by the subsequent easy World Hurdle winner Thistlecrack, but his credentials are hard to fault.

That said, this is an unusually competitive renewal, despite the lack of an Irish challenger, with former triple winner Reve De Sivola, high class French runner Alex De Larredya and tough as teak Lil Rockerfeller among his rivals in a field of 11.

Reve De Sivola won successive runnings in 2012, 2013 and 2014, and 12 months ago he found only Thistlecrack too good. While very well suited by deep ground, it was officially only good to soft for the last two runnings. He is now a veteran and has a deal to find on recent form, but he has no doubt been trained with one eye on this race.

Favourites have won six of the last ten renewals and been second on three other occasions. The 2013 market leader would have been second but for unseating.

Richard Johnson has won this four times, including twice on Reve De Sivola. He switches to Ballyoptic just seven days after winning another major prize for the stable on The New One, whom he was also riding for the first time.

West Approach is still a novice, but he is a half-brother to Thistlecrack so has the pedigree for this.

Nigel Twiston-Davies, trainer of Ballyoptic
We were disappointed last time, but he was probably beaten by a very good horse. We've been riding him for speed, but he's not quick enough to beat Unowhatimeanharry that way and so we'll ride him differently here and have him handier.

Dan Skelton, trainer of Shelford
He's done his racing in France lately and is an outsider here. It's as tough a three-mile hurdle as you will get outside Cheltenham, but the alternative is carrying top weight in a handicap.

Harry Fry, trainer of Unowhatimeanharry
He was impressive at Newbury and on paper he's the one to beat, but it's another day and he's got to step up again as it's his first run against seniors in a Grade 1 and it really could not be much more competitive. He's come through nicely from Newbury and we are very happy with him at home. This will tell us where we are with regard to the World Hurdle.

David Pipe, trainer of Un Temps Pour Tout
He's back over hurdles after running in the Hennessy but has has performed well at a decent level before and it looks an open race, bar the favourite. Both trip and track will suit him.

Colin Tizzard, trainer of West Approach
He's still a novice but the owners were keen to have a go and he's quite a good young horse. It might be a waste of a run, but you never know and he won't be disgraced.

Oliver Sherwood, trainer of Surtee Du Berlais
We are tilting at windmills but she's very progressive and there's nothing to lose as there's nothing else for her until the middle of next month. She would have preferred it softer though.

FIRST PUBLISHED 8:47PM, DEC 16 2016
He was impressive at Newbury but it's his first run against seniors in a Grade 1 and it really could not be much more competitive