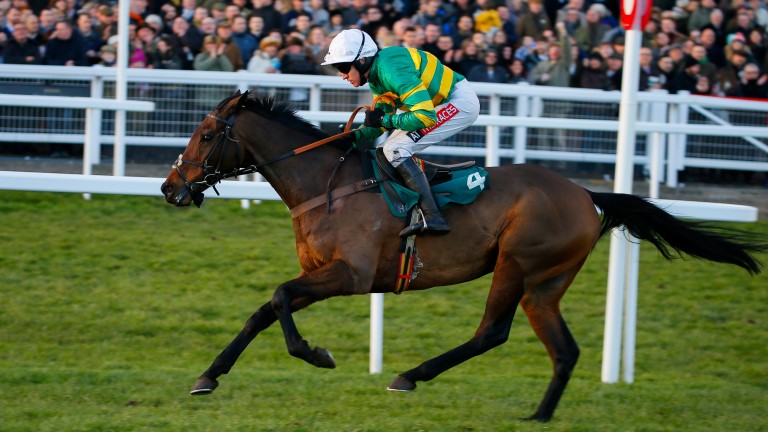 Unowhatimeanharry and Barry Geraghty strike in the Grade 2 Cleeve Hurdle in January
Mark Cranham
1 of 1
By Lewis Porteous 6:53PM, JAN 28 2017

Unowhatimeanharry strengthened his grip on the Sun Best Stayers’ Hurdle in March as he extended his unbeaten sequence to eight with a comfortable win in a race regularly used as a stepping stone to festival success.

The race was won by Thistlecrack last season and Unowhatimeanharry is now no bigger than 2-1 to follow up in the Stayers’ Hurdle just as Thistlecrack did 12 months ago.

After his previous win at Ascot, Barry Geraghty admitted his teak-tough partner had to dig deep to maintain his unbeaten record, but his latest win was rather more straightforward. Geraghty always in pole position as he stalked the leaders before cruising to the front between the last two hurdles.

The last obstacle had been dolled off due to the low sun and, perhaps thinking he had done enough, Unowhatimeanharry decided it was time for his party piece, half pulling up on the run to the line.

It mattered not, as Geraghty was alive to his game, and soon had his partner back in top gear to continue his unbelievable climb through the ranks, one that has seen him go from an official rating of 123 to 167 under Fry’s expert tutelage.

“Typically he only does what he has to do and pulled himself up in front but Barry was always confident,” said a gleeful Fry.

“Noel Fehily came in and said what a ferocious gallop it was but Barry said he travelled brilliant in the soft ground. By pulling up, hopefully he’s saving something in the tank.”

With Cole Harden, winner of the Stayers’ Hurdle in 2015, back in second, the form looks strong and the winner looks one of the safer market leaders for the festival in March.

“We’ve given Cole Harden 4lb as well so it was a very good performance,” said Fry. “That’s his third win of the season and eighth on the bounce; it’s just incredible for all the team. It’s a tried and tested route to the Stayers’ Hurdle and all being well that’s where we’re heading.

"He’s versatile with the ground but Barry was enthusing how well he travelled today, so soft ground would be perfect.”

Geraghty played down the winner's antics in the closing stages, adding: “He’s a pleasure to ride. There’s only so long you can wait and I felt I was outstaying my welcome. At every other stage he travelled so well.”

There was delight in the Cole Harden camp after he put up an improved effort despite the ground going against him.

Trainer Warren Greatrex said: “He's back, and at Cheltenham in March on better ground he'll be a different horse. I promise you, Gavin Sheehan said he hated every minute on that ground but he's a fighter. He's a star, and he just doesn't know when to lie down.”

Novice West Approach, for the Thistlecrack team of Colin Tizzard and John and Heather Snook, was another to run a pleasing race in third with the festival in mind and now goes for the Albert Bartlett.

FIRST PUBLISHED 4:35PM, JAN 28 2017
It was as authoritative and dismissive a length and three-quarters success as you will see