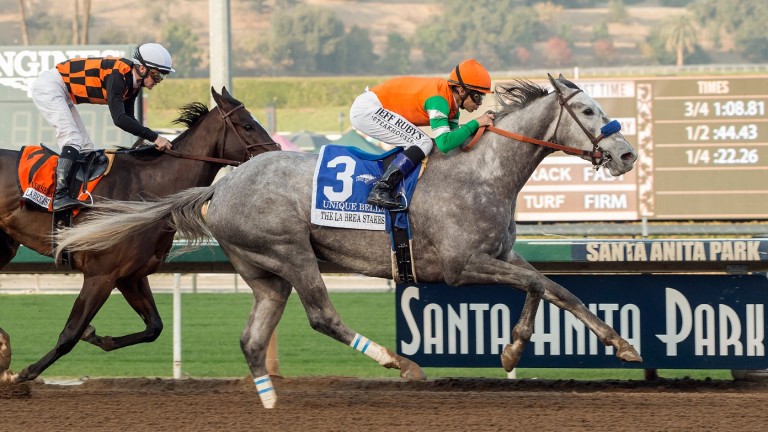 A return to Santa Anita could be the key for Unique Bella (Jerry Hollendorfer/Mike Smith) as the filly faces off against five others at a course where she has a fantastic record.

Not since her debut in 2016 has the four-year-old tasted defeat at the track, winning six times, including the Grade 1 La Brea Stakes, which she claimed last December.

Away from Santa Anita, Unique Bella has not proven as effective, disappointing as favourite in last year's Breeders' Cup Filly & Mare Sprint when seventh at Del Mar.

A slow start cost her last time out when runner-up in the Apple Blossom at Oaklawn, and Fernando Diaz-Valdes, racing manager for owner Don Alberto Stable, said: "She's always given us a hard time with the gate, but horses are not perfect.

"The outside post in the field of six will help us tremendously. If you watched the Apple Blossom, at the gate, she got a little impatient. The assistant starter grabbed her tail, and she hates that, so she sat down, they opened the gate, and she wasn't ready.

"If she does everything normal, she should win."

The main danger to Unique Bella could be Paradise Woods (Richard Mandella/Flavien Prat), but for every dominant victory, like her near 12-length demolition job in the Santa Anita Oaks last year, she has been turned over as a short-priced favourite three times.

Her attitude and 'delicate feet' have been attributed to her inconsistent efforts by Mandella, who said: "What you have are some fillies who are a little sensitive and high-strung, and they let that get in the way of their performance sometimes.

"She's sensitive, takes things too seriously sometimes. It's not that she's not trying. It's that she's probably trying too much. And she has delicate feet and that can lead to bruises, and sometimes you don't know until after the race."

Vale Dori (Bob Baffert/Rafael Bejarano) is also a Grade 1 winner after taking the Santa Margarita Stakes at the track last year over a furlong further.

Baffert said: "I'd like to get her into an easier spot, but there are no easy spots in California. She should take a step forward. She's slowly getting back there, but it usually takes her a couple races to get her going again."

FIRST PUBLISHED 6:00PM, JUN 1 2018
If she does everything normal, she should win