Union Strike bids to add her name to illustrious list 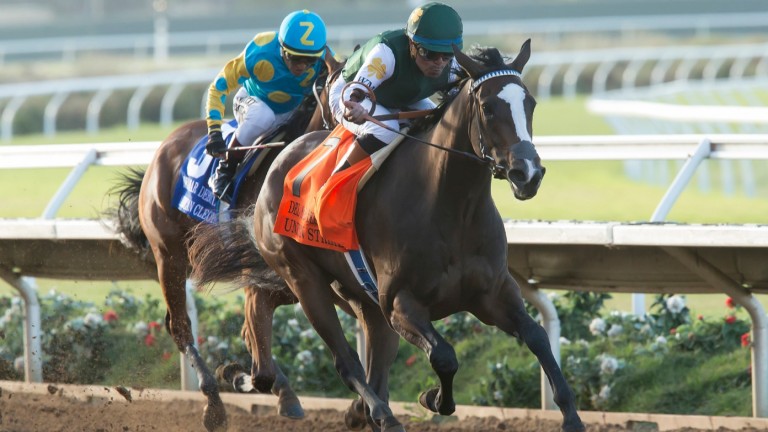 Won by Beholder and Songbird in recent years, the Juvenile Fillies has been a staging board for stardom. This year's edition looks an open contest.

The likely favourite is Union Strike, who improved dramatically for a step up to seven furlongs last time, recording a two-and-a-quarter-length win in the Grade 1 Del Mar Debutante Stakes, and should progress again for the mile trip here.

"The longer they run, the better she'll like it," said owner Mick Ruis. "This race should suit her well. I wouldn't trade places with anyone. I'm super confident.

"Her first start at five and a half furlongs was too short for her, but I wanted to get a run into her so we ran. After they crossed the wire, she was really striding out. Mike [Smith, jockey] got off her and told me how excited he was by her."

Bob Baffert is doubly represented with Noted And Quoted and American Gal, both last-time-out winners.

He said: "The thing about Noted And Quoted is she's shown she can handle the distance. American Gal is really fast, and they'll know she's in there, for sure. I think she can get the distance too, but you never know until they show you."

One to watch could be Valadorna for Mark Casse. She comes here off a wide-margin maiden win, but it was impressive enough to convince connections to throw her into this company.

"We have a head start having gone a mile already – things didn't go absolutely perfect for her but she still won," Casse said.

"What I think she has is a good education and more maturity than some. All the indicators are she's a good filly, and she's actually getting better, bigger and stronger."