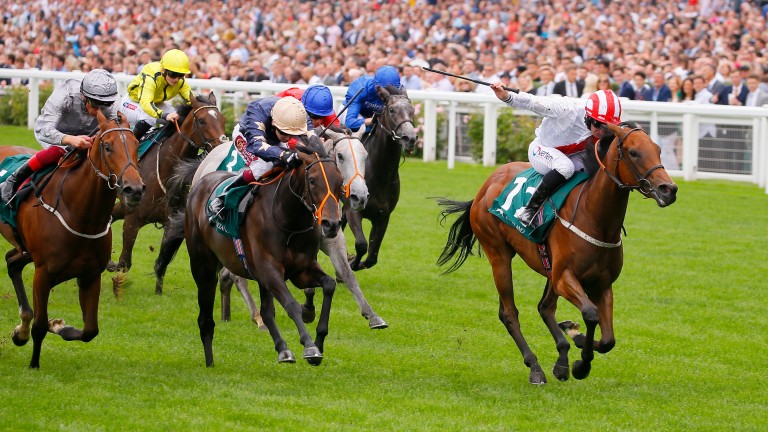 Under The Stars will be tasked with reaching for the stars after causing a 25-1 shock in the Group 3 Princess Margaret Keeneland Stakes under a well-timed ride from PJ McDonald.

The Sky Bet Lowther Stakes at York on August 22, for which she will be supplemented, and the Juddmonte Cheveley Park Stakes at Newmarket on September 28 are targets for a filly whose success provided a first black-type winner for sire Night Of Thunder, who carried the colours of owner Saeed Manana when beating Kingman in the 2,000 Guineas.

Winning trainer James Tate, slightly taken aback by the success, said: "She's just got a killer attitude like her sire Night Of Thunder and it's great she is his first black-type winner.

"I have six two-year-olds by Night Of Thunder, but most of them are late-maturing [types] from staying families and I'm looking forward to the rest."

Although Under The Stars has a 6f campaign mapped out this year, Tate is not ruling out the Qipco 1,000 Guineas next season, for which she has been given a quote of 33-1.

Summer Romance, the 4-5 favourite, was disappointing in sixth spot, and a post-race examination revealed she finished lame on her right hind.

FIRST PUBLISHED 2:05PM, JUL 27 2019
She's just got a killer attitude like her sire Night Of Thunder and it's great she is his first black-type winner

'Horses make a fool of you' - Angel Bleu makes quick reappearance a winning one First Group 1 for Alan King as Trueshan relishes conditions in Goodwood Cup 'These horses don't come around often' - Derby hero Adayar emulates Galileo ITV Racing tips: one key runner from each of the seven races on ITV on Saturday Richard Hannon aiming to continue stellar juvenile form with System Are we looking at a Group 1 horse in a handicap? International Stakes insight