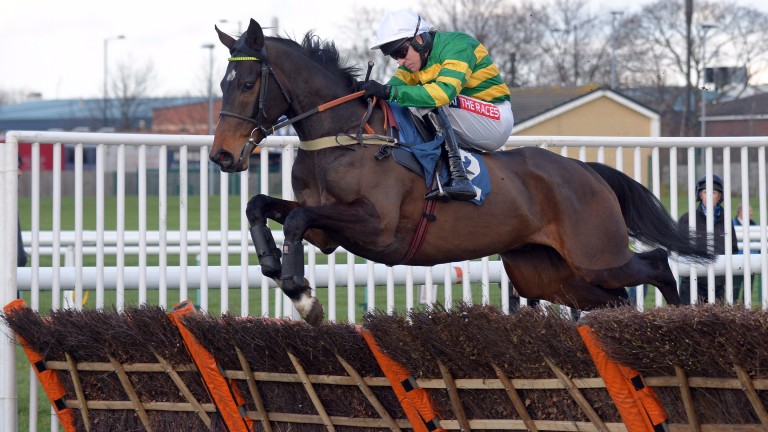 JP McManus appears to hold the aces in what is traditionally one of Cheltenham’s most competitive handicap hurdles outside the festival in March.

Winter Escape, unbeaten in three runs over hurdles as a novice last year, heads a three-pronged attack for the prolific owner and has topped the ante-post market since betting opened.

Winner of the Grade 2 Dovecote Novices’ Hurdle on his third and final run last season, connections resisted the temptation to run at the spring festivals and hope to see their patience rewarded this term.

Modus carries the McManus second colours but is no back number based on his eyecatching comeback at Ascot last month. On a card where it paid to race on the pace, Modus scythed through the pack having been held up and failed by just three-quarters of a length to overhaul plucky front-runner Sternrubin, who reopposes today but on 2lb worse terms with Modus.

Hargam is the outsider of the McManus trio but carries top weight for a reason and showed his wellbeing with a Listed win at Kempton a month ago.

Happy Hobbs
Philip Hobbs first won this race in 2002 with with subsequent Champion Hurdle winner Rooster Booster and has since celebrated a fine record in the race. Hobbs, who runs Sternrubin today, has won the Greatwood three times in the last ten years with high-class trio Garde La Victoire, Menorah and Detroit City.

Nicky Henderson trainer of Hargam and Brain Power
It’s a very competitive handicap but both deserve their chance. Hargam is a very straightforward horse who loves his work and racing and I was delighted he got his head in front at Kempton. Brain Power has done very well for his summer off. He’s talented and if he knows enough he should be competitive.

Philip Hobbs, trainer of Sternrubin
I was delighted with his Ascot comeback and hopefully he might have come on a bit for it. He goes on any ground and I don’t think that will be a factor.

Alan King, trainer of Winter Escape
He did everything we asked of him last season, but I’m glad that we decided to put him away after the Dovecote as he matured through the summer and came back from his holiday a much stronger horse. It is always one of the most competitive handicaps of the season but Winter Escape has been pencilled in for this since the early autumn and we’d be very hopeful about his chance off 142 if only the wet stuff would stay away.

Paul Nicholls, trainer of Modus
He just needed the run a little bit at Ascot. Harry [Cobden] got a bit of criticism for perhaps overdoing the waiting tactics but that’s exactly what I told him to do. I needed to see him finish his race and that’s what he did – he stayed on strong. It suits him to be ridden like that and a fast-run race will really suit him. If he runs like he did at Ascot he’s got a big chance.

Ben Pauling, trainer of Leoncavallo, A Hare Breath and Cyrius Moriviere
This has certainly been the plan for A Hare Breath and Cyrius Moriviere for some time. A Hare Breath goes very well fresh and is possibly in the best form we've had him in and I still think there's some movement in his mark. The rain they had yesterday is not in favour of any of mine but if it's no worse than good to soft it should be fine. If we’ve got Cyrius Moriviere back to the form of last year he'd have a very lively each-way chance. This is the last time we can run Leoncavallo off his old mark so if that's right then, along with Alex's [Ferguson] 7lb claim, he could be quite well in.

Evan Williams, trainer of John Constable
I thought he ran his race at Ascot but he’s running like a badly handicapped horse so we’ve had to claim off him. I don’t have any worries with the ground or anything but I just think he needs a bit of help from the handicapper.

Stuart Edmunds, trainer of Wolf Of Windlesham
I think I probably left him a bit short for his comeback but he travelled into the race well and will have come of for that. I wouldn’t want any more rain ideally and he’s got an entry at Ascot in case but the plan is to run.

Nigel Twiston-Davies, trainer of Thunder Sheik
He's a handicapper but he ran well when fourth at Market Rasen and hopefully he's improved for that.

FIRST PUBLISHED 6:00PM, NOV 12 2016
Winter Escape has been pencilled in for this since the early autumn and we'd be very hopeful about his chance off 142