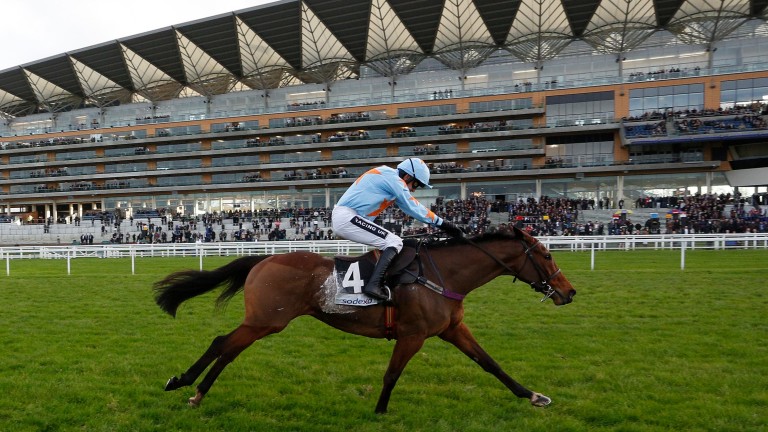 Un De Sceaux on his way to winning the Clarence House Chase at Ascot in January this year, beating Sire De Grugy by five lengths
Alan Crowhurst
1 of 1
By Tony O'Hehir 6:00PM, DEC 2 2016

Un De Sceaux, a four-time Grade 1 winning chaser, will be bidding to give Ruby Walsh a fourth win in the race and trainer Willie Mullins a first success in the event.

Last seen in action when failing to stay almost 3m2f in the Grande Course de Haies d'Auteuil in June, the versatile eight-year-old twice finished runner-up to Sprinter Sacre last season - in the Queen Mother Champion Chase and then the Celebration Chase over today's course in April, when let down by his jumping to trail a distant 15 lengths behind.

A first runner in Britain this season for his trainer, Un De Sceaux became the Mullins pick for the race during the week.

"He's a hardened and experienced campaigner and that's why we decided to run him rather than Douvan. We were happy with the way Un De Sceaux worked this week although ideally he'd prefer the ground a bit softer," Mullins said.

Cons First run since June and most effective on slower ground than he's likely to encounter here. Usually a good jumper but made a number of mistakes on previous visit to Sandown in April

FIRST PUBLISHED 6:00PM, DEC 2 2016
He's a hardened, experienced campaigner and that's why we decided to run him