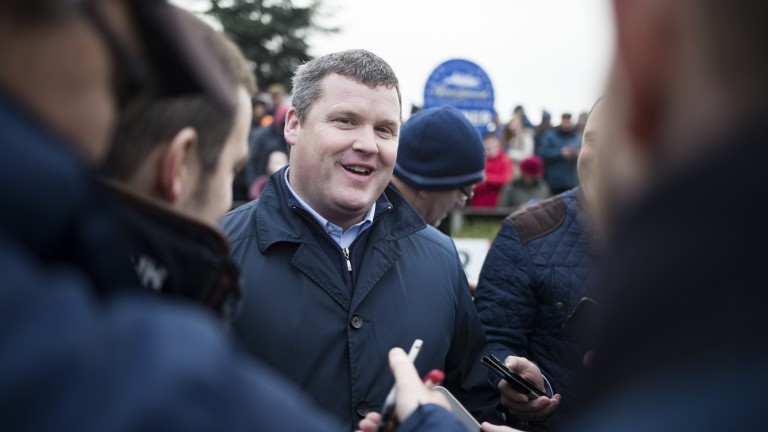 Gordon Elliott: could run five or six in the Thyestes Chase at Thursday
Patrick McCann (racingpost.com/photos)
1 of 1
By Tony O'Hehir 4:29PM, JAN 23 2018

Gordon Elliott has mopped up most of Ireland's top staying handicap chases in recent seasons, but the Goffs Thyestes Chase has so far eluded him.

The 3m1f handicap chase is the main event at Gowran Park on Thursday and Elliott is planning to be well represented in the first major staying handicap of 2018.

While the race has proved elusive for the trainer, it hasn't been for want of trying. He ran seven a year ago when Ucello Conti fared best, finishing second, and the ten-year-old will be attempting to go one better.

Elliott said on Tuesday: "We'd love to win the Thyestes and we'll probably run five or six on Thursday. We'll finalise plans in the morning, but Ucello Conti is a definite runner.

"He was second in the race a year ago and third in 2016. He ran a very good race when second to Anibale Fly in the Paddy Power Handicap Chase at Leopardstown last month and is a stayer who loves the testing conditions he'll have on Thursday."

While he has performed well in many big chases including when fourth in the Leinster National last year, Ucello Conti, who is owned by Simon Munir and Isaac Souede, has not won since scoring his third chase win in France in June 2014.

Mullins, who has Pleasant Company, Polidam and Isleofhopendreams in the Thyestes, said on Tuesday: "We're looking at running all three."

FIRST PUBLISHED 4:29PM, JAN 23 2018
He was second in the race a year ago and third in 2016. He ran very well when second to in the Paddy Power Chase at Leopardstown last time