Tyner out to make up for lost time with Gurteen 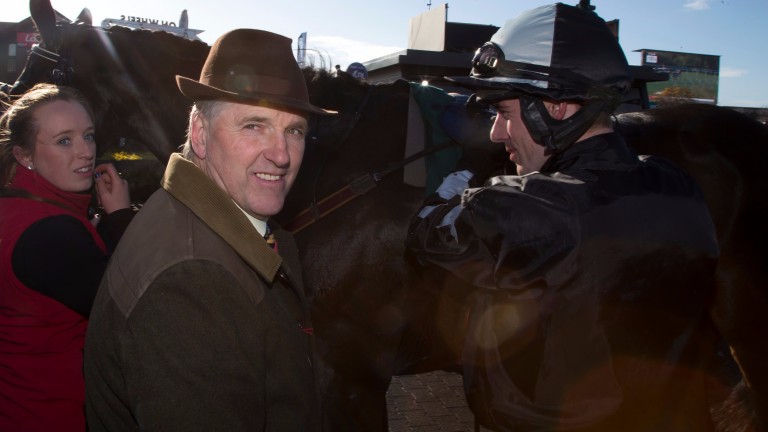 This race went for export last season when Nicky Henderson’s Cup Final, carrying 11st 7lb, caught Jury Duty in the dying strides under none other than Robbie Power.

You would think that carrying a big weight in a competitive handicap such as this would be too tough of a task to negotiate, but the past four renewals have been won by horses carrying at least 11st.

Last year's winning rider is a man in clover with everything he touches seemingly turning to gold.

He partners Oscar Sam, a full-brother to Irish Grand National hero Our Duke, for Jessica Harrington who is also represented by Our Man Zebo and Billy’s Hope.

Meanwhile, Robert Tyner has always thought a lot of Gurteen and he will be hoping to salvage something from the season with the talented seven-year-old.

Such is the competitiveness of this race, the past three renewals have been won by double figure-priced horses. Only one favourite has won this race since 2006.

Kim Bailey, trainer of Younevercall and Abbreviate
There is no reason why Younevercall won't get the trip. This race has been the target for a very long time. Abbreviate ran disappointingly last time but he had run well on his previous start.

Jessica Harrington, trainer of Oscar Sam, Billy’s Hope and Our Man Zebo
Oscar Sam is a very hard horse to place because he has such a high mark but he likes this place. Billy’s Hope is a tremendously consistent mare and I was delighted with how well she ran at Fairyhouse last week. She seems to have come out of the race well and she is a really good jumper. Our Man Zebo has been off the track for a long time. I have had him for about three or four months and it is nice to get him back to the track.

Gordon Elliott, trainer of Sutton Manor and Woods Well
Sutton Manor has plenty of weight and it will be difficult for him. Woods Well was wisely pulled up the last day by Bryan [Cooper] when he was hampered and we are hoping for a better show in this.

Philip Hobbs, trainer of No Comment
He ran very well at Aintree and is hopefully still an improving horse. He must have a reasonable chance.

Robert Tyner, trainer of Gurteen
He opened up a wound at Navan earlier in the season and we had to give him two months off. As well as that, a few of ours were out of sorts in themselves earlier in the season, but thankfully they are all in good form now. The plan will be to go back over fences with him next season but we have always liked him and we think he has the ability to win a handicap like this.

Eoin Griffin, trainer of Rathpatrick
He won well at Naas but his best form has come on soft or heavy ground. He definitely runs, but the ground is against him.

Tony Martin, trainer of Okotoks
Unfortunately we have missed a few engagements since he was fourth at Leopardstown in December behind That's A Wrap. He's in very good form and I hope he can run well.