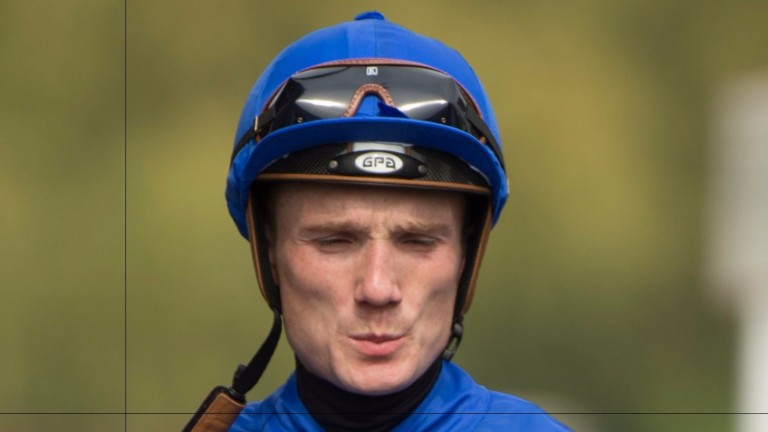 Both were taken to the major trauma centre at St George's Hospital in Tooting, Tylicki by air ambulance and Crowley by road ambulance.

Following a delay of more than an hour while both jockeys were attended to on course, the meeting was abandoned as a mark of respect.

A statement from Jockey Club Racecourses, which owns Kempton, read: "Racing at Kempton Park was abandoned today following an incident in the 3.20pm race.

"Freddy Tylicki and Jim Crowley have been transported to St George’s Hospital, Tooting, for further medical assessment following the incident.

"The Injured Jockeys Fund will provide further updates on the conditions of the jockeys. Our thoughts are with Jim, Freddy and their families."

Kempton clerk of the course Barney Clifford said: "Both jockeys were on spinal boards and both gave their consent to me and the doctor to update their next-of-kin family member."

Regarding the decision to abandon the card with four races left, Clifford added: "Having discussed it with jockeys - and stewards - the unanimous decision, as a mark of respect to the two lads who have been injured, was that we abandon racing."

Ted Durcan and Steve Drowne were also involved in the incident but returned to the weighing room relatively unscathed.

Clifford added: "I touched base with Steve Drowne and he was fine. Ted Durcan was quite shook up. I just hope and pray both Freddy and Jim are okay."

Durcan said: "I might have injured my ankle, but I've been lucky as it's nothing more serious than that. I was in behind a wall of horses towards the back of the field and I saw the two horses hit the floor right in front of me. I had no way of avoiding them.

"I didn't see either of the boys afterwards, as they moved me off the track and took me back to the weighing room."

Drowne said: "I've been very lucky. I've got a bit of a dead leg but I am otherwise okay."

The incident occurred during the third race on the card, the mile fillies' maiden.

Tylicki's mount, Nellie Deen, clipped heels with the leader Madame Butterfly - who went on to win - in an incident the stewards deemed to be accidental and which caused the fall on the turn for home.

Crowley, riding Electrify, was brought down, as were Drowne aboard Skara Mae and Ted Durcan, who was riding Sovrano Dolce. All four horses involved in the incident galloped away seemingly unscathed.

Two road ambulances promptly arrived at the scene, while the air ambulance arrived approximately 30 minutes after the pile-up. The jockeys were attended to on course before Crowley was put on a stretcher and moved into the road ambulance, which departed at about 4.35pm. The air ambulance left shortly afterwards.

No jockey has ridden as many winners as first-time champion Crowley on the Flat in Britain in 2016, his tally of 184 comfortably beating his previous best calendar-year haul of 148 - which was achieved in 2012 - and 19 more than second-placed Silvestre de Sousa has managed to date.

Crowley edged out De Sousa in a thrilling conclusion to the Stobart Flat jockeys' championship and was officially crowned at Ascot on Champions Day just over a fortnight ago.

The 38-year-old had been a jump jockey until 2006 and has ridden in the Grand National.

Tylicki, 30, had likewise been enjoying the most successful season of his career and registered a first Group 1 success when steering Speedy Boarding to victory in the Prix Jean Romanet at Deauville in August.

He gained further acclaim and top-level honours when giving the same filly a brilliant tactically-astute ride to land the Prix de l'Opera at Chantilly on Arc day.

FIRST PUBLISHED 5:09PM, OCT 31 2016
Following a delay of over an hour, stewards consulted with the jockeys at the track and the decision was taken to abandon the rest of the meeting