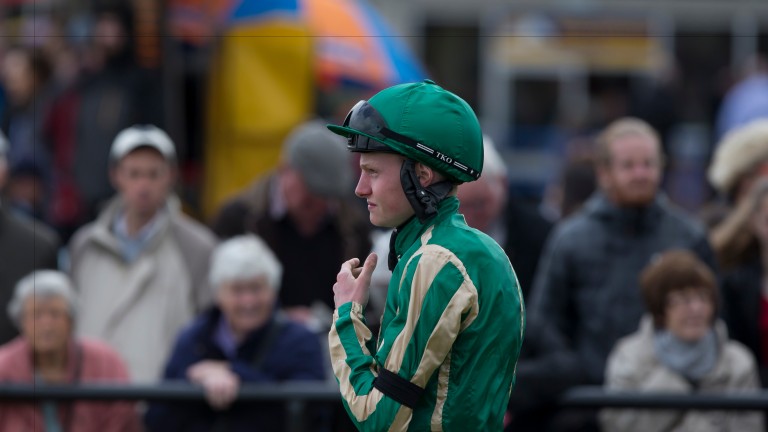 Ireland's two-time champion Flat apprentice Connor King is set to take out a jumps licence and could have his first ride over hurdles this weekend after meeting the licensing committee on Tuesday afternoon.

The 20-year-old, who won the title in 2013 and 2015, is one of the tallest members of the weighing room and is keen to keep himself busy through the winter but stressed he will continue to pursue his career on the Flat as well.

King said: "I had an interview with the licensing committee earlier today [Tuesday] and it went well I think. I did not have to school or anything as I had already done that before with RACE. I will find out whether I was successful or not on Thursday.

"The main reason I want to take out a jumps licence is to keep busy over the winter as there is usually only one meeting a week at Dundalk. I have been riding out for Joseph [O'Brien] and he has allowed me to ride in some schooling hurdles which I have really enjoyed.

He added: "I went to Enda Bolger's for a few days to do some schooling as well and that was a great thrill. I loved jumping when I was younger and I get a great buzz out of it. I'm not too sure when my first ride will be. It might be tricky as I don't have a claim and it is very competitive but hopefully some opportunities will come my way and I can do light weights over jumps which is a bonus."

King was keen to stress that his Flat career is not over and wants to add to the 119 winners he has ridden on the Flat since he turned 16 in 2012.

"I'll definitely keep riding on the Flat," he said. "I've had a great few years and a lot of trainers have been very good to me. I enjoy it and have no intention of stopping. I have not looked too far down the line to see where my future lies. I'll just take it as it comes and this is another exciting challenge."

FIRST PUBLISHED 3:39PM, DEC 6 2016
I loved jumping when I was younger and I get a great buzz out of it. It might be tricky as I don't have a claim and it's very competitive, but hopefully some opportunities will come my way