He is a 61-year-old trainer with just two horses and no staff at his yard in Berkshire, but Pat Murphy left Chepstow on Wednesday dreaming of returning there in a few years for the track's main event.

Forthright, opinionated and infectiously passionate, Murphy was a Coral Welsh Grand National winner with the Leighton Aspell-ridden Supreme Glory in 2001 and formed his long-term plan for another crack at the race after 16-1 shot Nessfield Blue finished an eyecatching fourth in the 2m3½f handicap hurdle.

Like a teenage girl and her pin-up crush, he remains besotted by the sport despite a brief break when Jose Santos assumed control of the licence at Murphy's East Garston base near Lambourn.

The Brazilian has now moved on, assisting Ismail Mohammed in Newmarket, so Murphy is "back in business!".

He is still looking for his first winner since he returned. Murphy said: "I've got a couple of horses I bred, and I own half of each of them.

"Staffing is a nightmare. I do them myself and the chap leading Nessfield Blue up worked for me for 18 years, but retired two years ago. He just comes and brings the horses racing with me, but other than that I do it all myself.

"I haven't got any owners other than a 92-year-old lady who owns half of this fella."

Having started training in 1992, Murphy landed the Lanzarote at Kempton in 1993 with Tomahawk and also won plenty of races with Cloudy Bob, Bertie Wooster, Salute, Jigsaw Boy, Maktu and Sir Joey.

He added: "Jose Santos was looking for somewhere to train and you couldn't have two trainers in a yard, so I let him have the licence. I still had my own horses that we ran under his name. When he packed up I took the licence out again.

"I'm 61 and still ride them out, school them and everything else. I've income from other stuff and don't do this for money –  I do it because I love it. 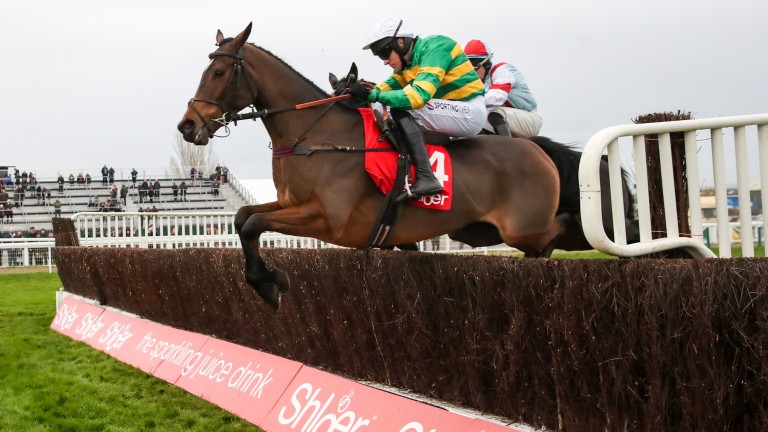 "I went to Cheltenham on Saturday and Sunday. Why? Because I love good racing and good horses. I still get a buzz going and looking at Defi Du Seuil and horses for the future like Thyme Hill.

"I've never had more than 25 horses, and that was only one year. I'm happy being hands-on, doing it all myself and I'll continue doing it as long as I'm enjoying it."

More enjoyment will come if Nessfield Blue, a five-year-old son of Kayf Tara, turns those Chepstow dreams into reality.

"He's a project horse," the trainer continued. "He's going to be a chaser and would have been in the first three but for missing the third-last – look how he stayed on his feet.

"I see him as a future chaser and that's what everything is aimed at. Who knows, in three years, he might be back here for a Welsh National."