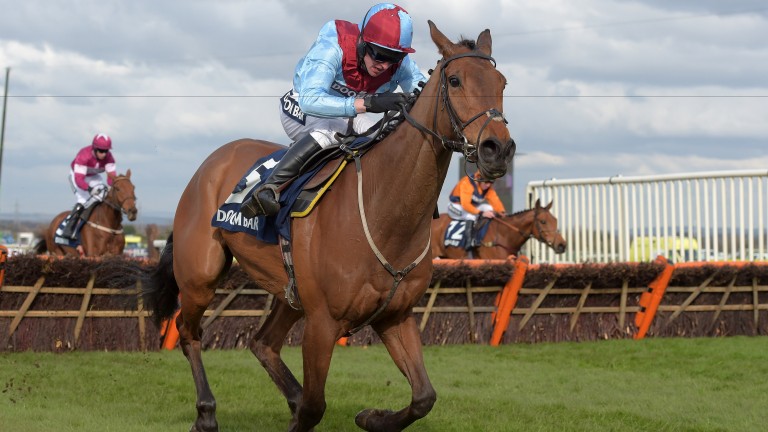 Champion jump jockey Richard Johnson is set to lead Nigel Twiston-Davies's challenge for another big hurdles prize this weekend after being approached to ride Ballyoptic.

Fresh from steering The New One to victory in the International Hurdle last Saturday, Johnson is the trainer's first choice to replace the injured Ryan Hatch, who suffered multiple fractures in a spill at Cheltenham last Friday, in the JLT Long Walk Hurdle at Ascot.

Johnson said: "I'm very lucky to pick up the ride and Ryan Hatch's bad luck has been my luck. It's good to hear he's doing well and nice to get the ride.

"Looking at the Newbury race, you'd think he has to improve to beat Harry Fry's horse, but Nigel's horses are in great form and Ascot's a staying track – it's a stiff three miles there and Ballyoptic is a strong stayer. I've won the race four times, but would like another."

Johnson guided The New One to an all the way win at Cheltenham, tactics which he could also be asked to employ on Ballyoptic.

Ballyoptic won his first four starts for the stable, including the Grade 1 Sefton Novices' Hurdle at Aintree but the sequence was halted when the fell at Wetherby in October. He started favourite for the Long Distance Hurdle at Newbury last month but was comfortably seen off by Unowhatimeanharry, who will reoppose on Saturday.

Twiston-Davies said: "We are going to try different tactics and ensure Ballyoptic is much handier away. We always thought he was getting a bit slow now so we'll use more forcing tactics."

Unowhatimeanharry is 11-8 favourite with Coral and Betway, while Ballyoptic is an 8-1 chance with William Hill.

Asked if Ballyoptic's Newbury performance might have flattered Unowhatimeanharry, Twiston-Davies said: "I've no idea. I am hoping that's what we will be saying but it's doubtful. If we take Unowhatimeanharry out Ballyoptic ran a superb race. On form we have no chance of beating him but we're going to try something different."

He added: "Jamie Bargary is going to Haydock so I think Dickie Johnson is riding him."

Twiston-Davies put plans to pursue a chasing career with The New One on the back-burner after he beat My Tent Or Yours to clinch a record-equalling third victory in the Grade 2 International Hurdle, a race he only contested after the Exeter meeting at which he was declared in a chase was called off due to frost.

As a result The New One will have his next start in the 32Red.com Christmas Hurdle at Kempton on Boxing Day, a race in which he has finished second twice including last year when beaten by Faugheen.

"The New One is in very good form and is Christmas bound," said Twiston-Davies. "He has a fortnight between races and he should be okay for that.

"We are a little bit more invigorated about hurdling. It was a very peculiar day because if Exeter hadn't been off, the handicap chase would have been won by Aso and My Tent Or Yours would have looked quite good in the International Hurdle.

"If Exeter had been on My Tent Or Yours would have won by 13 lengths at Cheltenham and they would have been very pleased."

Jenkins will sidestep the Sky Bet Supreme Trial at Ascot on Friday with trainer Nicky Henderson instead opting to head for Kempton on Boxing Day.
No bigger than 7-1 for the Supreme Novices' Hurdle in March, Jenkins will bid to emulate his stablemate and last year's Cheltenham Festival hero Altior when he lines up in the novice hurdle on the opening day of the 32Red Winter Festival.

The ground at Ascot was good to soft yesterday and little change is expected. Clerk of the course Chris Stickels said: "We are good to soft. We don't expect much rain, the forecast is dry and mild through Friday and Saturday."

FIRST PUBLISHED 2:41PM, DEC 14 2016
We're going to try different tactics and ensure Ballyoptic is much handier away. We always thought he was getting a bit slow now so we'll use more forcing tactics