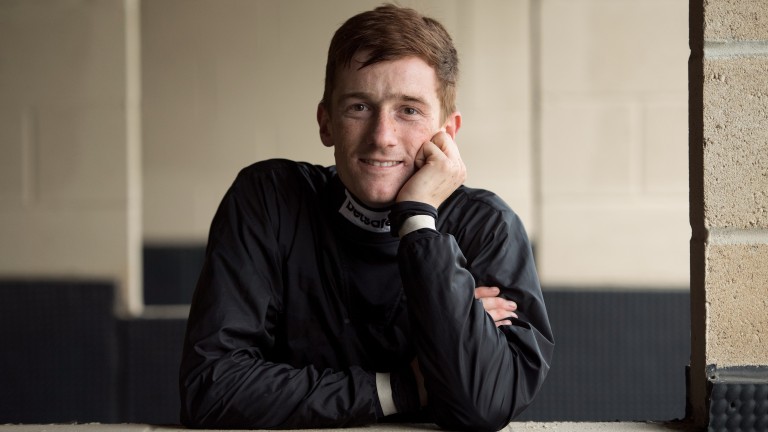 Sam Twiston-Davies: suffered a broken elbow in a fall at Sandown on Sunday
Edward Whitaker
1 of 1
By Bruce Jackson UPDATED 8:01PM, NOV 13 2017

Sam Twiston-Davies has confirmed he will miss Cheltenham's three-day November meeting this weekend and Haydock's Betfair Chase on Saturday week after suffering a broken elbow in a fall at Sandown on Sunday.

The 25-year-old rider, who hopes to be back in time for Newbury's Ladbrokes Winter Festival at the start of December, had his elbow put in a cast in hospital on Monday following the fall from Double Ross.

Twiston-Davies, who rode in the following bumper aboard Ostuni after the fall, said: "It's annoying and frustrating. It was giving me no pain and I iced it overnight, but this morning it had swelled considerably so I went to get it checked out."

Cue Card: might not be partnered by Harry Cobden after all
Edward Whitaker

Twiston-Davies's injury raises a question over whether Harry Cobden will be able to ride the Colin Tizzard-trained Cue Card in the Betfair Chase at Haydock as he is stepping into the lead riding role for boss Paul Nicholls.

Twiston-Davies was set to partner Romain De Senam, a leading hope for Nicholls in the BetVictor Gold Cup, at Cheltenham on Saturday.

He added: "Paul always has some nice novices to run at the meeting as well so it's disappointing, but this time last year I nearly lost my spleen and was out for longer so it could've been worse."

The rider will know more after he returns to hospital to have the cast replaced but hopes to be back for Newbury's Ladbrokes Trophy, formerly the Hennessy Gold Cup.

He said: "I'd hope to ride a day or two before as you don't want to go into a big meeting too rusty.

"One minute you're thinking you're having a great time and then something like this happens. It's hard to watch horses winning when you're not on them but I've been quite lucky with injuries."

His four booked rides at Kempton on Monday were taken by Cobden, who won on one of them, the 1-3 chance Give Me A Copper for joint-owner Sir Alex Ferguson.

FIRST PUBLISHED 5:35PM, NOV 13 2017
Paul always has some nice novices to run at the meeting as well so it's disappointing, but this time last year I nearly lost my spleen