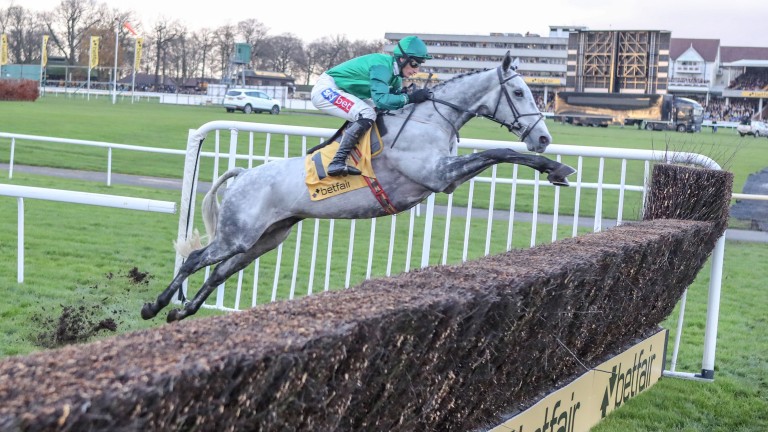 Bristol De Mai: back in action in the Betfair Chase at Haydock on Saturday
John Grossick
1 of 1
By Peter Scargill UPDATED 5:28PM, NOV 22 2018

Bristol De Mai beat his rivals by 57 lengths in the Betfair Chase last season and trainer Nigel Twiston-Davies believes he will prove a tough rival again at Haydock on Saturday.

Owned by Simon Munir and Isaac Souede, the grey produced one of the performances of the season when flattening the field in the Betfair Chase, powering on relentlessly in the heavy going as the rest struggling to maintain forward momentum.

This year the going is set to be significantly different with rain in short supply at Haydock, which was good to soft, good in places on the chase course on Thursday, but Twiston-Davies believes him to be much more than a soft-ground bully.

Bristol De Mai has the small matter of Cheltenham Gold Cup first and second Native River and Might Bite as opposition in his bid for back-to-back titles, meaning he was on Thursday the 7-1 third favourite with the sponsors for a contest also set to feature Thistlecrack and Clan Des Obeaux.

But Twiston-Davies said: "As long as the ground is on the soft side of good I’d say he’d go. If he goes there and shows what he can do he’s as good as any of them."

All three of his wins at Haydock have been on soft or heavy ground, but Twiston-Davies points to performances such as his seconds in the JLT Novices’ Chase and Bowl Chase at Aintree as showing his can run just as well under quicker conditions.

"He’s run well on good ground before so as long as we’re happy we’ll go and find out – that’s what racing’s all about in the end, isn’t it?,” he said.

"There are no other races for him to go for and I think he should be able to perform to his best on it, but we’ve got to go out there and see."

BHA announces working party to improve British racing's culture of respect 'He should be bang there' - which trainer fancies his chances in Fleur De Lys? Are Grade 1 ambitions justified for improving Tommy's Oscar? Jonbon 'in great form' ahead of Supreme prep run but will he justify the hype? Tracks not expecting any issues for stellar cards on a super Saturday Winter Million at Lingfield: what is it and which horses are in contention?