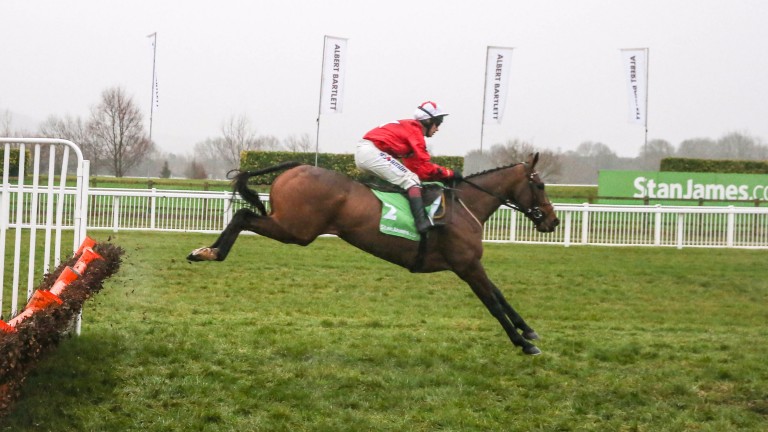 The New One: Nigel Twiston-Davies happy to stick to two miles for now
John Grossick (racingpost.com/photos)
1 of 1
By Andrew Dietz 5:05PM, JAN 19 2017

Although not on the level of Willie Mullins, Nigel Twiston-Davies has his own Cheltenham Festival conundrums to solve and the trainer left his options open on Thursday by entering stable stars The New One and Ballyoptic for the Sun Bets Stayers' Hurdle.

A day after Faugheen and Annie Power featured in the Stan James Champion Hurdle entries, the long-absent duo also appeared among ten Mullins-trained entries in a total 47-strong list for the day three spectacular.

Ante-post favourite Unowhatimeanharry is joined by five other JP McManus-owned possibles, including 2014 winner More Of That, multiple Grade 1 scorer Jezki and Yanworth, who won the 32Red.com Christmas Hurdle last month.

The New One, who is set to run over in the stanjames.com Champion Hurdle Trial at Haydock on Saturday, finished second to Yanworth at Kempton and Twiston-Davies is not convinced a step up in trip is needed.

"We've given The New One a Stayers' Hurdle entry, but at the moment two miles is very much in my thoughts," said Twiston-Davies.

"The Christmas Hurdle was run like a stayers' race and he was outstayed by Yanworth, who was first off the bridle, and from that you get the hint he doesn't stay."

Ballyoptic, on the other hand, is on target for the race, with the galliardhomes.com Cleeve Hurdle on Saturday week booked as his prep.

The Grade 1 winner was a last-flight faller when battling it out with Unowhatimeanharry in the JLT Long Walk Hurdle last month.

"He was in there scrapping and it would have been lovely to see what would have happened, but we'll never know," added Twiston-Davies on At The Races. "He's come out of the tumble fine and is in good form, and he'll go to Cheltenham on Saturday week."

US challenger Rawnaq adds an international flavour for Maryland-based trainer Cyril Murphy, who is eyeing a lucrative US$500,000 (£405,580) bonus after his charge won the Grade 1 Calvin Houghland Iroquois Hurdle at Percy Warner Park in May.

"The horse has run well over fences and hurdles at Cheltenham, so we know the track doesn't hold any fears," said the former jockey, who used to work for Neil Mulholland and Nicky Henderson.

"He's not ground-dependent either, as he won a good race on testing going in Ireland.

"Ruby Walsh rode him in October [when winning the Grade 1 Grand National Hurdle at Far Hills] and was impressed.

"I asked Ruby if he felt we could finish in the first four or five in Cheltenham and he said he would not put us off chasing the bonus because it's an open year in the stayers' division."

The trainer has won the opening-day contest in each of the last eight years.

FIRST PUBLISHED 3:14PM, JAN 19 2017
We've given The New One a Stayers' Hurdle entry but at the moment two miles is very much in my thoughts