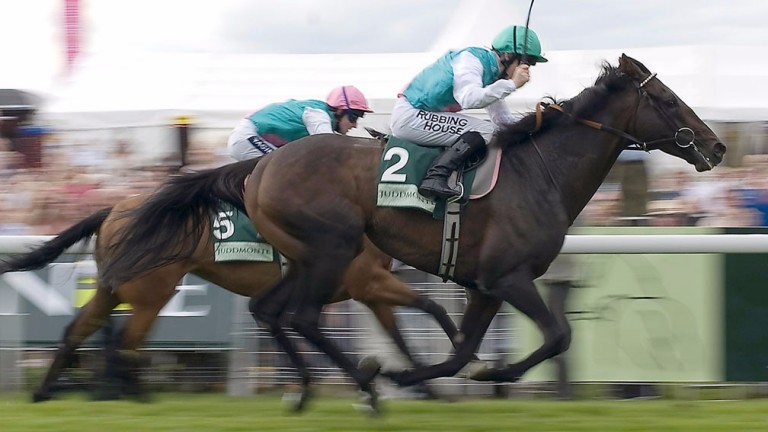 Twice Over, trained by Sir Henry Cecil to win 12 races including two Champion Stakes and an Eclipse, sired his first top-level winner when Sand And Sea (Dennis Drier/Anton Marcus) proved much too good for the opposition. The colt carries the colours of Investec boss Bernard Kantor, who was instrumental in Twice Over standing in South Africa.

The 4-1 chance lost ground at the start, but he was good enough to lead just under two furlongs out before drawing away to score by two and a quarter lengths easing up from 12-1 shot Varallo.

Marcus, winning this race for the fourth successive year, said: "He showed today what he was all about."

Drier, whose record is even better – he has trained six of the last eight winners, added: "I said beforehand that this horse knows how good he is, let's just see how good - and now I'm over the moon. When you get a horse like this you are blessed."

Brave Mary (Paul Matchett/Gunter Wrogemann) sprang a 30-1 shock, leading over a furlong out to beat favourite Green Plains by a length and three-quarters.

The runner-up gave chase as soon as the winner hit the front but she never looked like getting on terms.

Wrogermann said: "This was a big step up in class but we were hoping for a good run. They went very hard up front and I got a nice lead but she really surprised me by the way she quickened up."

Matchett, who is based in Johannesburg, added: "We have come a long way but winning this makes it all worthwhile."

Carry On Alice (Sean Tarry/S'Manga Khumalo) delivered the hoped-for fairytale ending to her great career, leading over a furlong from home to beat the strong-finishing Just Sensual by a length.

The five-year-old Captain Al mare was winning her fifth Grade 1 and now goes to Australia where she will begin her broodmare career.

Khumalo said: "This is a special mare, quite remarkable, and today the plan was to get her to relax and when she hit the front I could feel she still had plenty in hand."

Tarry added: "There has been a lot of talk about how much racing she has had [29 races] and how busy she has been, but she is tough and hardy. At the 300-metre mark she still hadn't come off the bridle and the one-length winning distance was flattering."

Fears about the outside proving slower had long been discounted by this stage and Bull Valley (Tarry/Khumalo) powered home at 61-10 to beat Search Party (17-2) by a length and a half. The winner is a son of the Aidan O'Brien-trained Toreador.

Tarry said: "He needed his last run more than I anticipated and he is not the soundest of individuals. I didn't run him in the Computaform as I was worried he might have picked up a penalty for this."