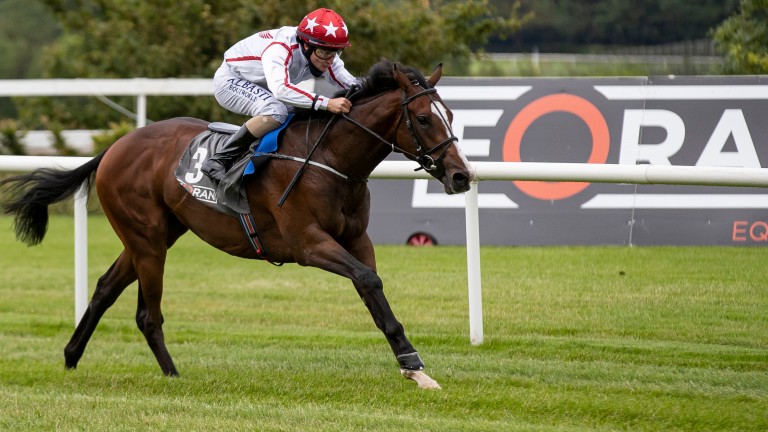 Cadillac: hugely impressive when winning by nine lengths on his Leopardstown debut
Patrick McCann
1 of 1
By Mark Boylan 6:00PM, AUG 21 2020

Three of the last four winners of the Tyros Stakes have gone on to land this traditionally high-class Group 2 on their next start, but it's the horse who bypassed that Leopardstown assignment 16 days ago making this contest most interesting.

All eyes will be on Cadillac, yet another potential juvenile star from Jessica Harrington's conveyor belt of two-year-old talent.

The Lope De Vega colt showed a massive engine when bolting up by nine lengths in an auction maiden at Leopardstown early last month and was set to go off favourite for the Tyros before being withdrawn due to drying ground - that won't be an issue now after significant rainfall this week.

The quality of opposition on his introduction may not have been overly strong but the visual impression he created on that occasion was striking.

Tyros winner Military Style, by War Front, appeared to relish the quick surface last time but could struggle to uphold that form with stablemate Van Gogh, who ran encouragingly to be beaten just a neck on his second start.

The pair are part of a three-pronged attack for Aidan O'Brien, who is seeking a 14th win in the race and a fifth in succession. 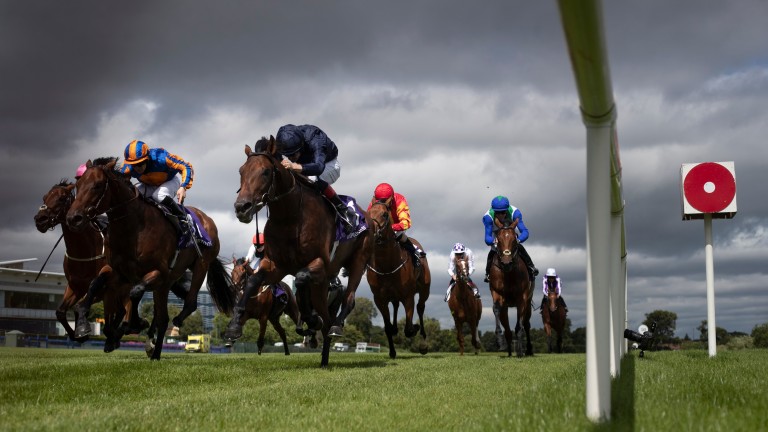 The Donnacha O'Brien-trained Southern Cape didn't have the clearest of runs in the Tyros but could show better now on softer ground, while beaten Railway Stakes favourite To Glory will surely improve a fair deal for his green fifth here last time.

Don't be surprised if the maiden Trusted Ally runs well at a big price. He isn't short of ability and will handle conditions.

Jessica Harrington, trainer of Cadillac
Hopefully the ground will be okay and that it doesn't get too soft for him. He's in good form and we're looking forward to seeing how he gets on. He's got to step up to the plate now.

Aidan O'Brien, trainer of Van Gogh, Military Style and Ontario
We were delighted with Van Gogh's run in the Tyros Stakes. He was drawn a bit wide around Leopardstown on fast ground but we were happy with him and he was coming home very well. You couldn't be sure about softer ground for Military Style but we'll see how he gets on. He's in good form and came out of the Tyros well when he was very tough. Ontario won at Galway last time and the ground should be okay for him.

Joseph O'Brien, trainer of Snapraeterea
It's a big step up for him after winning at Roscommon on Tuesday but he handles the ground and is fit. He has a bit to find on the figures but we're hoping he can acquit himself well.

Donnacha O'Brien, trainer of Southern Cape
He was a bit flat out the whole way in the Tyros and when he got going he didn't get much luck in running. I think the slower ground will suit him. He probably wants a mile but there aren't too many races coming up so we thought we'd let him take his chance.

Michael O'Callaghan, trainer of Trusted Ally
He's probably a bit above average. He ran a great race on debut at Limerick and was very unlucky at Galway when he probably didn't handle the track. He got no room when he went for his run but hit the line strongly. We're pretty realistic and he's stepping up in class, but I saw the rain coming and thought the ground would suit him. If he could manage to run into a place it'd be great.

Future looks bright for Oliver with another pair of promising juveniles Joseph O'Brien: the sheer scale and versatility of his operation is staggering 'It was an anxious wait' - State Of Rest survives inquiry drama to win Cox Plate Joseph O'Brien's flying start to jumps season continues with quality double Progressive Masen a 'proper horse in the making' after Knockaire success Aidan O'Brien equals Vertem Futurity record with 'very exciting' Luxembourg