True Self 'has plenty going for her' in Stanerra Stakes, says Willie Mullins 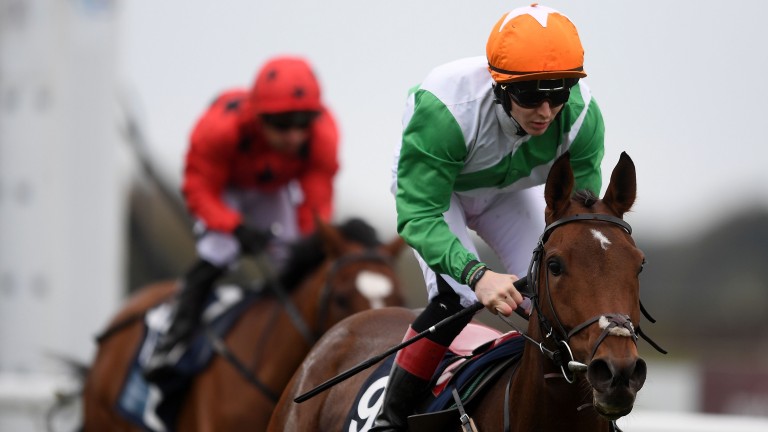 True Self, a three-time winner at Listed level, will be seeking a first Group-race success at the second attempt when she faces seven rivals in this event named after 1983 Prince of Wales's Stakes heroine Stanerra.

Trained by Willie Mullins, True Self finished second in the Pinnacle Stakes at Haydock last month and Mullins said of the six-year-old: "She ran well at Haydock considering the downpour they had did her no favours.

"She's in good form and has plenty going for her – the track, the trip and the ground."

Cimeara, who won this race last year when trained by Jim Bolger, represents Joseph O'Brien, who said: "She's been in good form at home recently and we know the track and trip suit, so we're looking forward to a good run."

South Sea Pearl, a nine-length winner of a maiden over 1m4½f at Bellewstown eight days ago, is the least experienced in the line-up and her trainer said: "She won very nicely last time and we think the longer trip should suit her.

"Peach Tree is better than she ran in the Ribblesdale last time when she made the running and we think going further than a mile and a half will suit her, Flowering Peach and possibly Simply Beautiful."

Jaega represents Dermot Weld, who is the most successful trainer in the history of the race. The four-year-old ran True Self to three-quarters of a length at Gowran Park before disappointing at Cork last time.

"Jaega is in good form. We're hoping to get more black type for her but any ease in the ground would help as she likes to get her toe in," Weld said.

The John Oxx-trained Moteo, third in the Munster Oaks on her most recent start, completes the line-up and will be tackling the trip for the first time.

FIRST PUBLISHED 6:00PM, JUL 10 2019
She ran well at Haydock considering the downpour they had did her no favours. She's in good form and has plenty going for her

'He could be a Guineas/Derby horse' - O'Brien excited by Point Lonsdale Ascot collector's item as Dettori's flying dismount outshone by tearful groom Love brightens the week for Aidan O'Brien but draw-bias punters are wrong-footed Red-hot Mike O'Connor proves the master once again for in-form Henry de Bromhead 'He shows everything at home - he relaxes, he quickens, he gallops' Moore has been booked on Mother Earth from day one - is it the right choice?