Tropics: 'I saw something that day I hadn't seen much - he worked like a train' 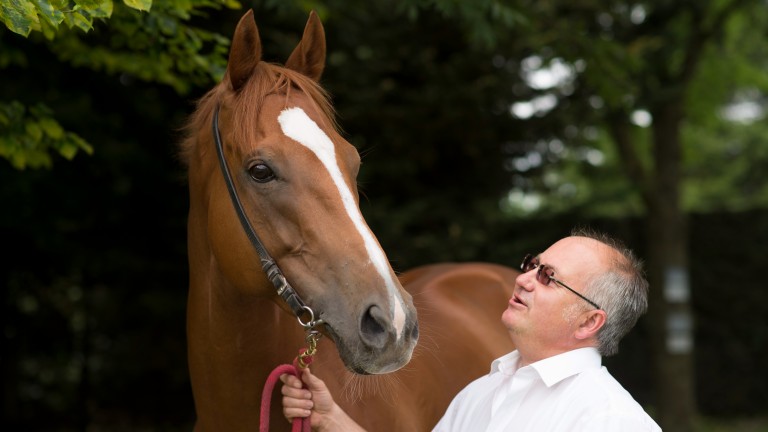 Tropics: the apple of his trainer and owner Dean Ivory's eye
Edward Whitaker (racingpost.com/photos)
1 of 1
By Maddy Playle 6:00PM, JUL 3 2021

Fans Favourites' is a weekly feature in the Racing Post Weekender in which we talk to those closest to racing's most popular horses and find out why they tug on our heartstrings. This week's subject: Tropics. 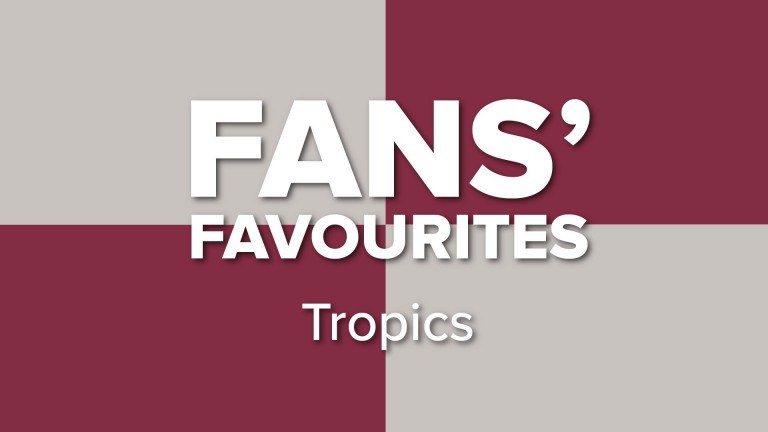 Such is the dominance of racing's superpower owners, it is very rare a Group 1 horse slips through their hands.

In September 2009, John Ferguson shelled out $700,000 at Keeneland to purchase a flashy chestnut for Godolphin.

By proven sire Speightstown and a half-sister to a multiple Graded winner in the US – who has since produced the rapid dual Breeders' Cup winner Roy H – the colt had the pedigree to succeed for Sheikh Mohammed's organisation.

Dean Ivory, who took over the training and ownership of the horse now known as Tropics, traces his part in the remarkable story to a phone call from his old friend Graham Thorner, the former jockey and bloodstock agent.

Alongside wife Lesley in his office with tea in hand, dogs swarming, he says: "I got a phone call from Graham about this horse he'd got called Tropics. He'd bought him to go hurdling with, and he said a few people had seen him who didn't really like him. He thought he might do me.

"The horse was a bit of a monkey – he was full of it. I gave him a good once-over and he sold himself because of his eye. He had a lovely head and a kind eye. You couldn't help but fall in love with him.

"He was four and it was early June. I said I'd pick him up in a couple of weeks because I was a bit busy. I got a call about five days later and Graham said: 'You've got to come and pick this horse up, he's doing handstands, I don't know what to do with him, I'm frightened to turn him out.'"

Ivory likens the young Tropics to a frustrated schoolboy who wasn't suited by being lost in a big Newmarket yard, but things were different at Harper Lodge Farm in Radlett, Hertfordshire.

In the yard where his father Ken trained – a painting of 17-time winner Dawn's Delight still holds pride of place outside – Ivory was able to concentrate on ironing out any physical problems and figuring out his new arrival's psychological ones.

Tropics was headstrong despite wearing a hood at home and by the time he was nearing a first trip to the races Ivory had no idea what to expect. The day he took him for a racecourse gallop at Kempton is something the trainer recalls clearly.

"The horse he was with was rated 72. They went once around, right-handed, then up faster a second time," he said. "Tropics came past and I thought 'wow, he's working like a steam train'. It was his first time off the bridle and he was stretching out. I saw something that day I hadn't really seen much – it was the first time I'd ever seen a horse like him.

"And then I was thinking 'well, where's my other horse?' There she was another furlong behind and I was thinking there was something wrong, but there wasn't. I couldn't believe how well he worked."

Tropics, now a four-year-old, went into his first race as an unconsidered 66-1 shot. Yet he delivered on the promise he had shown by finishing second and then got off the mark at the third attempt, winning by four lengths as the 1-2 favourite on the Kempton all-weather.

His character was developing all the time at home. "The horsebox goes out and he's always calling, saying 'When am I going? When am I going?'" says Ivory. "We used to leave racing tack outside his box so he'd think he was going racing.

"You've got to channel them – it really is all about confidence and getting his mind right. These horses always like to be first out, they've got to feel special. You can't then break it, that's why he and Librisa Breeze are in the two boxes at the head of the yard. 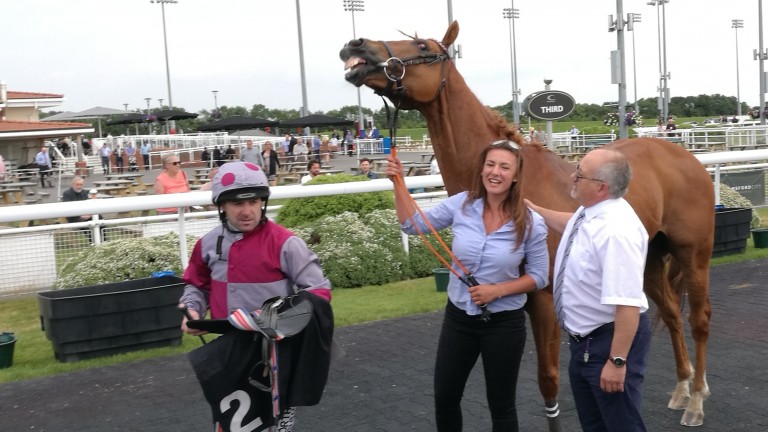 In his five-year-old season, the effervescent chestnut climbed 23lb in the handicap, recording five wins as he advanced to Listed success in the Hopeful Stakes on Newmarket's July course – a venue he grew to love – and then to Group 3 victory in the Bengough Stakes at Ascot.

Idiosyncratic by nature, Tropics didn't always produce his best and had a dismal spell before reaching new heights in the 2014 July Cup, storming home to finish second to Slade Power.

He also travelled with stable stars Sirius Prospect and Lancelot Du Lac to the Dubai Carnival and, although he never competed due to complications with vetting, the trip provided Ivory and his wife with a moment neither of them have forgot.

Lesley says: "There was an osteopath treating Sirius [Prospect] and Dean came in and I've never seen anything like it.

"The three horses, they just didn't know what to do with themselves. Sirius just wrapped himself around him and the other two went bananas. It was like, 'Oh my God, Dad's here'. The two girls treating the horses started crying. I've never seen anything like it.

"It was like, 'What are you doing out here? You've come all this way to see us?'"

Dean adds: "He pulled me right into his body and the others called as if to say 'it's my turn, it's my turn'. It was really moving that they recognised me."

Ivory and his wife talk about their horses like they are family, and in many ways they are. So much so Lesley always ensures there are enough vegetable peelings from their Sunday roasts to go around, and Dean knows exactly which horses favour what.

"I do loads of vegetables, I keep putting more stuff in. They have parsnip tops, cauliflower and cabbage," says Lesley.

"They know in the afternoons when I come down [with the vegetables]," adds Dean. "Tropics didn't like parsnips or brussels or anything like that but Librisa Breeze did. But because he was eating it, now Tropics has all of it too."

Perhaps powered by this special diet, Tropics very nearly gave his trainer a monumental success in the 2015 July Cup.

With regular rider Robert Winston injured, Tropics was ridden for the first time by Pat Cosgrave and was prominent from the outset before forging ahead in the final furlong. He looked certain to come home victorious only to be agonisingly headed by champion three-year-old Muhaarar on the line. 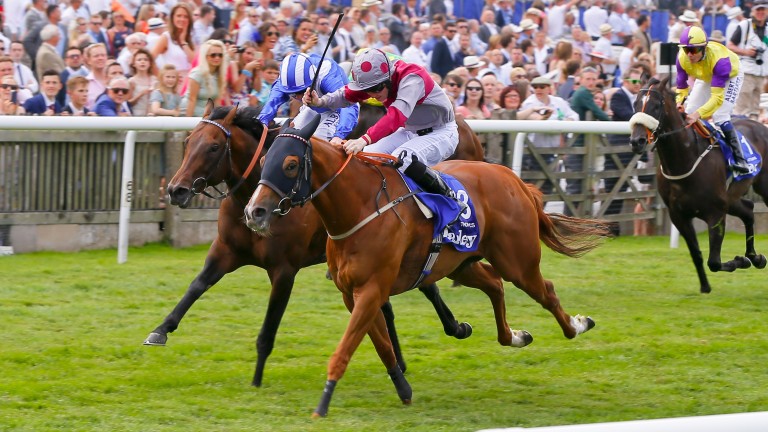 Tropics (near) looks to have the 2015 July Cup in safe keeping, only for Muhaarar (far) to lunge late
Mark Cranham

Lesley says: "It was such an exciting day. Charlie Hills [Muhaarar's trainer] thought we'd won – I was the only one that thought we hadn't. Everyone was congratulating Dean.

"You had more congratulations than Charlie," she says to her husband. "We went in with him and he said 'I really thought you had it'. It was very nice because we were all together."

Dean says: "It was one of those days, even though he was second, he still won. To me, he won that race. It was very emotional.

"It was such an exciting time for me, everything was going right. It took them an hour and a half to give us the photo, and everybody came and told us they'd wished we'd won. If ever there was a fairytale, he would have been it – we'd never won a Group race before and he was my own horse in my grandfather's colours. It would have been special."

Ivory credits 'Sirius', 'Lance' (the 11-year-old retiree is housed just across from Tropics and, although shaped like a bodybuilder, is only too happy to have a cuddle) and 'Librisa' (a little more feisty but undoubtedly one of his trainer's favourites) for changing his life throughout our conversation, but it is clear Tropics means a great deal to him and his family and, despite the fact he is 13, the veteran may not be done. 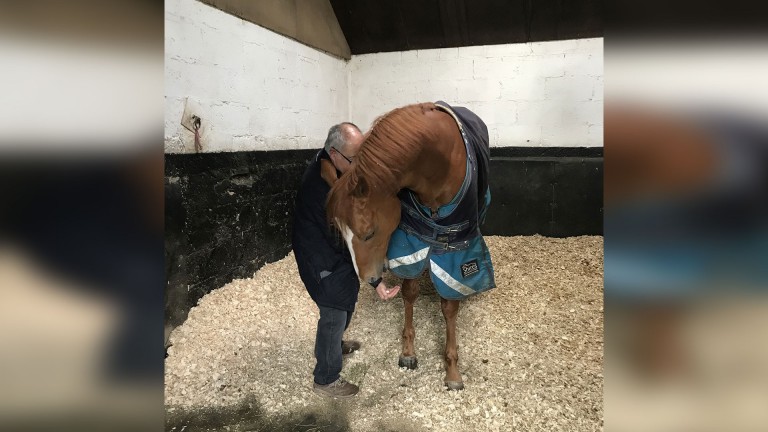 He has been invaluable to the career of young apprentice Sophie Ralston – "you drive a normal car, then you drive a Ferrari," says Ivory – and even came within a neck of winning his most recent start in February.

He is currently recuperating from an injury while his future is being considered, but the trainer isn't against running him again – citing the fact Dawn's Delight came out of retirement and won his last race at the same age.

He says: "I can't describe the feeling I've had with Tropics and what he's done for me. It's been so exciting for the whole yard. He's put 110 per cent into every one of his runs.

"With the prize-money that we won I built new stables, new offices, a new manege and new barns. With Tropics, his legacy will live forever around here."

As the trainer guides me into the stable to introduce me to the main man himself, polos aplenty, it is easy to understand whatever decision he makes will be the right one.

FIRST PUBLISHED 6:00PM, JUL 3 2021
It was like, 'Oh my God, Dad's here'. The two girls treating the horses started crying. I've never seen anything like it

Foul weather and a right couple of turn-ups, what more could jumps fans ask for? Champion Hurdle alert: amazing Honeysuckle 'could still be improving' The plot against gambling: how a powerful lobby is out to change betting forever Likely weekend winner looks the one to beat for Cheltenham target at 9-2 Denman: 'He could pick you up and chuck you out the box or take your arm off' 'It can transform kids' lives' - the charity inspiring children through horses