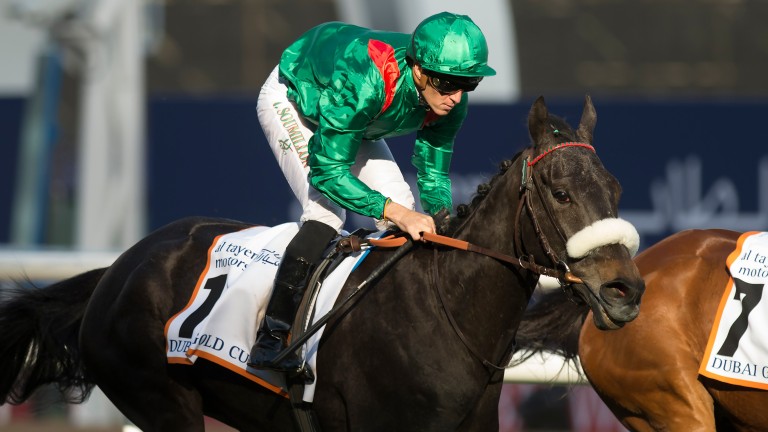 Vazirabad: heads the stayers' category following his victory in the Prix Royal-Oak on Sunday
Edward Whitaker
1 of 1
By Jon Lees 4:59PM, OCT 25 2016

The colt, owned by the Starship Partnership which includes legendary jockey Lester Piggott, entered the reckoning for Cartier Two-Year-Old Colt honours with a comfortable all-the-way success on Town Moor. He now sits level in fourth place with 48 points alongside Caravaggio and Blue Point in the table headed by Dewhurst winner Churchill.

There are two remaining opportunities for juveniles to score points this Sunday when Saint-Cloud hosts the Group 1 Criterium International and Criterium de Saint-Cloud.

In last weekend's other Group 1, four-year-old Vazirabad, trained by Alain de Royer-Dupre for the Aga Khan, triumphed in the Prix Royal-Oak at Saint-Cloud for a second successive year, a victory which put him top of the Cartier Stayer category with 84 points having won four of his six starts this year.

The Group 1 Emirates Melbourne Cup, at Flemington on November 1, represents the final chance for stayers to enhance their claims when Big Orange, Wicklow Brave and Bondi Beach will attempt to add to their points haul.

Minding heads the Horse of the Year category with 236 points, but with her season over stablemate Found (176) will have another chance to press her claims at the Breeders' Cup in either the Classic or Turf.

Harry Herbert, Cartier’s racing consultant, said: "The Flat season in Europe may be almost at a close, but there is high-profile international racing ahead of the Cartier Racing Awards. Leading European stayers are due to contest the Emirates Melbourne Cup, while the Breeders' Cup has again attracted entries from some of the best horses in the world."

The 26th annual Cartier Racing Awards, established in 1991 to reward excellence in the sport, will be presented at a ceremony in London on November 8.

The Awards are determined by a combination of points earned in Pattern races (30 per cent), the end-of-season opinions of a panel of racing journalists (35 per cent) and votes of Racing Post and Daily Telegraph readers and Channel 4 Racing viewers (35 per cent).

The public vote is under way with Racing Post readers able to submit their vote online or via the form alongside - and to be in with the chance of winning a classic Cartier watch as a result.

FIRST PUBLISHED 3:27PM, OCT 25 2016
The Flat season in Europe may be almost at a close, but there is high-profile international racing ahead