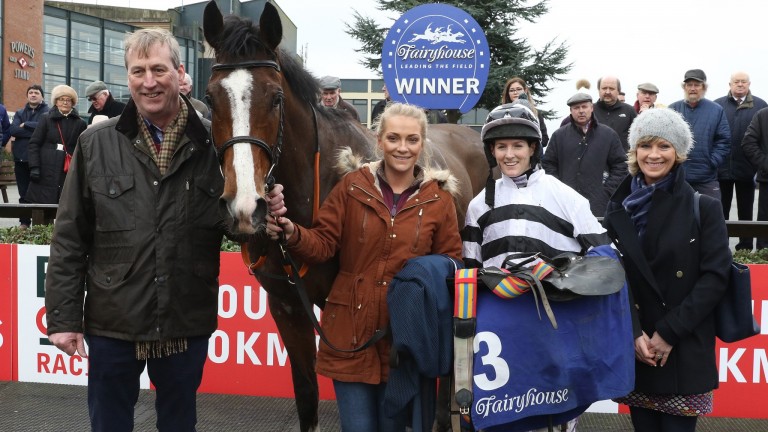 Ellmarie Holden has high hopes for Ex Patriot at Limerick
CAROLINE NORRIS
1 of 1
By Brian Sheerin 9:48AM, MAR 29 2017

Ellmarie Holden is hoping her dream run can continue when Ex Patriot lines up for the Grade 1 AES Champion Four Year Old Hurdle at Punchestown next month, while she reports Abolitionist on course for the BoyleSports Irish Grand National.

Ex Patriot finished fourth in the Triumph Hurdle at Cheltenham despite running loose beforehand, leaving Holden to rue what might have been.

She said: “I thought he ran a brilliant race. If he hadn't got loose who knows what would have happened. He travelled into the race super and finished fourth. Maybe he would have finished second or third, but I don't know if he'd have beaten the winner [Defi Du Seuil] or not as he was very impressive.

“Punchestown is the plan now. We want to have him nice and fresh for the race so we said we'd skip Aintree.”

Holden was bullish after Ex Patriot won his maiden hurdle at Fairyhouse in January, labelling him a "machine".

Her confidence hasn’t wavered, despite two defeats at Grade 1 level, and she added: “I've no doubt he's the best horse I've ever been around. He's really exciting and is still growing into himself.

“I can't wait to send him over a fence next season, that's where his future lies. He's going to make a serious chaser.”

Abolitionist on course for Irish National

In less than a year, 27-year-old Holden has built up a small but select stable and looks to have a live Irish Grand National hope in the shape of Abolitionist.

A general 14-1 shot for the €500,000 contest, Abolitionist was last seen running away with a competitive Leinster National at Naas, a performance that surprised her trainer.

She said: “He proved me wrong as he was coming back after a slight problem and I thought he needed better ground.

“It was nice to be proved wrong all the same as he flew home, but I think he'll be better on better ground in the Irish National.

“It's crazy to think we have a live chance in the Irish National as I haven't even had a licence for a year yet. A lot has happened in a short space of time and I couldn't have dreamt about going to Cheltenham, Punchestown or an Irish National with horses who have a chance.”

FIRST PUBLISHED 9:24AM, MAR 29 2017
If he didn't get loose at the start, who knows what would have happened