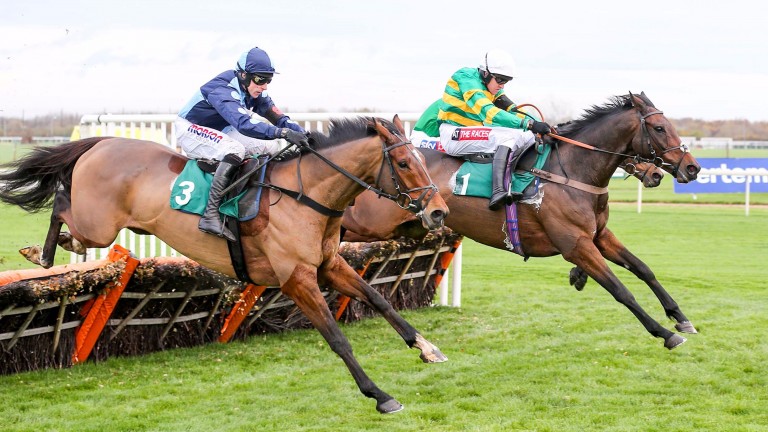 Unowhatimeanharry (right) jumps to the lead at the final flight
John Grossick
1 of 1
By Keith Melrose UPDATED 5:46PM, NOV 11 2017

Had Unowhatimeanharry been given a racecourse gallop, as trainer Harry Fry reportedly toyed with, it is easy to imagine the instructions to Barry Geraghty. It would have run along the lines of: "Follow the lead horse and pull away in the last furlong."

As it happened, they went to Aintree and picked up north of £28,000 for doing more or less exactly that.

The Read Noel Fehily At 188Bet Hurdle has a short history yet has already gained a reputation for being thin on numbers but stout on quality. It was won by Bobs Worth (from Simonsig) in its first year and Un Temps Pour Tout 12 months ago. Its third running drew perhaps the biggest name in long-distance hurdling.

Unowhatimeanharry won four of his five races last season, but the one exception came at the Cheltenham Festival, where he was third in the Stayers' Hurdle, and that precluded him from being hailed as an undisputed champion.

His second season in the senior ranks began in the same uncomplicated fashion as he defeated Value At Risk and Top Notch in a slow-burning but honest scrap from three out, which the three jumped more or less abreast.

Geraghty said afterwards: "The plan had been to go straight to Newbury, but Harry said he was going so well at home that we'd only be sitting on our hands waiting over the next few weeks, so we came here instead."

Geraghty confirmed it had been a satisfactory comeback: "It was the right sort of race for a first run and it rode like a smart race. He pulled out plenty and won well."

The beaten horses have fences as an option and third-placed Top Notch is more or less guaranteed to go back to chasing now.

For the winner, this season will of course swing on rectifying 2016-17's only blemish, and bookmakers generally cut Fry's stable star for the Stayers' Hurdle. Shortly after the race, he had joined last year's winner Nichols Canyon at 6-1 (from around 8-1) on most lists, with Betfair offering a standout 13-2.

Looking ahead to the season, his rider essentially agreed: "He's a top horse and if he can hold on to last season's form there's plenty to look forward to."

FIRST PUBLISHED 3:03PM, NOV 11 2017
The plan had been to go straight to Newbury, but Harry said he was going so well at home that we'd only be sitting on our hands waiting