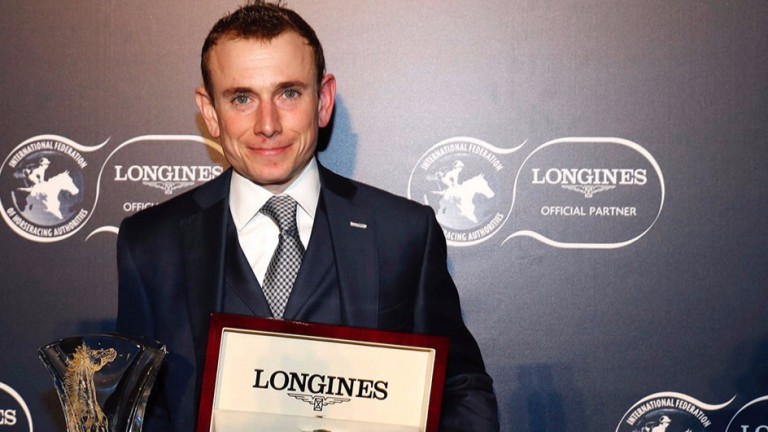 Ryan Moore poses with his trophy after being crowned Longines World's Best Jockey
Longines
1 of 1
By Stuart Riley in Hong Kong 2:08PM, DEC 10 2016

Ryan Moore was crowned the World's Best Jockey for the second time on Friday night after a truly remarkable year.

Since Frankie Dettori collected the award last year, Moore has won 21 Group/Grade 1s, starting with two on International day at Sha Tin, and he could get off to an even better start this year with three favourites and a second favourite in Sunday's four Group 1s.

Other top jockeys were united in praise of Moore. "He's a fierce competitor. I enjoy riding against him because he forces me to another level as a rider," said Frankie Dettori.

"He's a great jockey, he's very patient and is probably the greatest we have seen in a very long time," were Christophe Soumillon's words, while Hugh Bowman added: "He's uncomplicated, he's a man of no nonsense. He's very focused, he's very humble and he's very fair."

But perhaps the best words of all came from Moore himself when he was asked for any advice he would pass on to young jockeys. "Stay grounded, concentrate on being the best you can and picking up as much advice from people and listening. Just be a good person."

Callan keeping busy – and not just on the golf course

With just two meetings a week it is easy to think jockeys in Hong Kong have a simple, straightforward life.

The fact that the two things Neil Callan loves most about his new lifestyle are the amount of time he gets to spend with his family and on the golf course (not necessarily in that order) does little to dispel that impression.

But look a little deeper and a more detailed picture emerges. He rides work from 6am until 8am six mornings a week. On Mondays and Thursdays the load is at its greatest. Especially as, without any agents allowed, he has to manage himself and book all his own rides. To get the best rides he works weeks in advance.

It's not enough to be a good jockey, to succeed you have to be able to sell and push yourself. Spend a minute in Callan's company and you will conclude he probably struggles with that part a fair bit less than others. 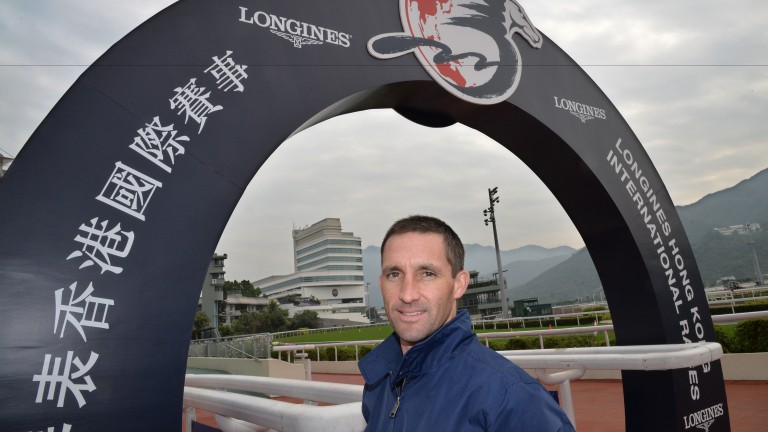 Neil Callan: "We're not just sitting around waiting for raceday each week"
Hugh Routledge
Tuesdays also feature between four and ten trials to ride in, from 8.30am until 10am. Then he swims and goes to the gym, or runs, or cycles, or boxes.

Wednesdays feature more gym sessions, an afternoon sweat in the bath while going through the form and riding at Happy Valley in the evening – after which he struggles to sleep.

Thursdays are a repeat of Monday with the confirming of rides and haggling for spares, while Friday is another day of trials after trackwork.

On Saturday it's back in the gym, or on the bike, or in the boxing ring, followed by a sweat. Sunday morning is the only one with no trackwork, which is instead replaced with a gym session and a sweat in the bath before "up to ten rides, and hopefully ten winners."

On top of all that he has to meet up with owners regularly, or appear at functions, just to keep the rides coming in.

But most evenings are spent picking his kids up from school – by all accounts his eldest son is a talented cross-country runner – and having dinner with his wife Trish. In case you were wondering, the best days for golf are Monday, Tuesday, Thursday or Friday.

"It's a relaxed, good lifestyle, but it is busy. We're not just sitting around waiting for raceday each week."

The advantage of being on the ground is having to the chance to see the horses work each day and speak to many of the key connections (or their translators). Without further ado, here's what I've gleaned.

The Vase is up first and, while Highland Reel will not get as easy a time of it as last year, and he has had a long hard season, the race looks like being run at a strong enough pace to let him prove he is miles better than the rest. Nuovo Record for the forecast. One Foot In Heaven does run.

Pure Sensation is still lame and will breeze on Sunday morning before a decision is made over his participation in the Sprint, which he won't win. If there's a potential superstar in the field, it's Big Arthur, who was compared by his trainer to Japan's greatest sprinter Lord Kanaloa. If not, the locals have a strong hand and are well drawn, with Aerovelocity and Lucky Bubbles the pick of theirs. Gary Moore is persuasively bullish about his giant Takedown.

The Mile doesn't look a great race and Able Friend should be more than good enough to win, even though he is not 100 per cent. That said, Logotype is just the most beautiful animal. I have concluded he is probably the reason the emoji with hearts for eyes was invented.

The Cup has the potential to be an all-time classic between Japan's two best horses, both of whom are retiring after this regardless of the result. If A Shin Hikari reproduces what he did last year, and I suspect he might, then Maurice will have to be every inch the wonderhorse they believe him to be to get the best of the battle. At the prices it's A Shin Hikari for me.