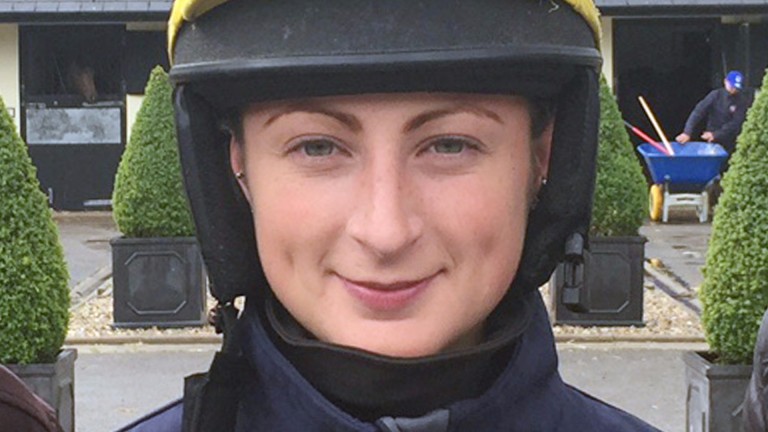 Rising star apprentice Nicola Currie said she was following the Josephine Gordon route to success after recording her first treble at Chelmsford on Thursday night.

Currie, 24, had never ridden two winners on a card, let alone three, until she struck with victories on Titan Goddess, Marshall Aid and Spare Parts.

They doubled Currie's score for 2018 and lifted her career tally to 26, 19 of which were recorded last year. She sits third in the list of leading claimers on the all-weather this winter.

"It was a good evening," said Currie on Friday. "I certainly didn't think the treble would come through but I was hopeful for Titan Goddess and I knew Spare Parts would give a good account.

"In the past few weeks I have been looking for that double. To finally get it and make it a treble was a huge surprise. I have to try to get the next one now.

"Riding a treble makes 100 per cent difference to my confidence. That grew even as I was riding last night. I can take that confidence into the next meeting."

Currie, who works for trainer Richard Hughes, shares an agent with Gordon who used the all-weather season as a springboard to becoming champion Flat apprentice in 2016 and riding out her claim. Without an allowance Gordon became only the second female to ride 100 winners in a year in 2017.

Currie has not only Hughes behind her but other trainers such as Phil McEntee and Mark Usher, who are lending significant support.

"Josie rode for Phil McEntee the previous two years and with her riding out her claim he was looking for another claimer to use," she said.

"Richard specifically put me with [agent] Phil Shea, the reason being he had Josie, who can also do light weights, so if there was something she couldn't ride the hope was he could put my name forward.

"Luckily it has kind of worked out that way and if I can follow in her footsteps even halfway it would be an absolute achievement. That's the plan anyway.

"If we can have a good all-weather season then it makes sense to go for champion Flat apprentice championship come summer. It's definitely achievable. You have to be realistic but at the same time you have to push yourself. You don't want to make a ridiculous goal because you will only disappoint yourself but you need something to aim at. Aim high and hopefully get there."

McEntee is a confirmed fan of the jockey from the Isle of Arran. He said: "We tried to target an apprentice we could use for the all-weather season through the winter.

"Two years ago, Josephine was claiming seven, we liked the way she rode and the rest is history. It's exactly the same with Nicola. We watched her through the summer and struck a verbal agreement that she would be stable jockey for the winter with me having first shout after Richard Hughes. Last night was a testament to the way Nicola is going."

Currie had her first racing job with Lucinda Russell after starting out in showjumping.

"I realised I was never going to be a jump jockey because I was too light but Lucinda got me my apprentice licence out and gave me my first ride and was  then kind enough to let me move south to pursue my career. Even now Lucinda and Peter Scudamore have been behind me."

She added: "I didn't just want to be a stable girl, I wanted to be a jockey. At the time It was a ridiculous goal but we've got there. I wasn't for giving up.

"Not many jockeys come from the Isle of Arran. I think everybody goes to the pub to watch me now."

FIRST PUBLISHED 12:51PM, JAN 12 2018
If I can follow in her footsteps even half the way it would be an absolute achievement. That's the plan