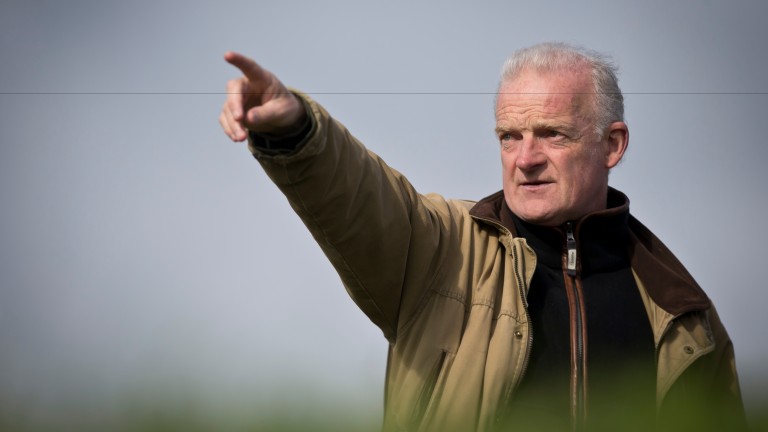 Willie Mullins is looking for a few winners on the horizon this weekend, with Un De Sceaux his first runner in Britain this season
Patrick McCann
1 of 1
By David Jennings 6:27PM, NOV 29 2016

Sunday could set the tone for the rest of the season in the Irish trainers' title race as there are three valuable Grade 1s at Fairyhouse and the two toughing it out at the top are set to bring out their big guns for the battle.

Gordon Elliott is more than €500,000 in front of Willie Mullins after his sensational six-timer at Navan on Sunday but he could struggle to maintain that lead as the defending champion is responsible for six of the ten possibles for the Hatton's Grace Hurdle, including the mighty Faugheen.

Elliott has never won the Hatton's Grace Hurdle or the Royal Bond Novice Hurdle but he has landed the Drinmore Novice Chase three times and could run A Toi Phil, Diamond King, Lieutenant Colonel and Prince Of Scars. Mullins will not be represented at all. That could have a big bearing on the title race.

The Royal Bond will be fascinating as Mullins could run the exciting pair Penhill and Saturnas as well as the unbeaten filly Airlie Beach against Elliott's Labaik and Bilko.

Paddy Power make Mullins 2-5 to retain his title, with Elliott now a 7-4 chance to claim the crown for the first time.

Elliott past winners: None

Elliott past winners: None