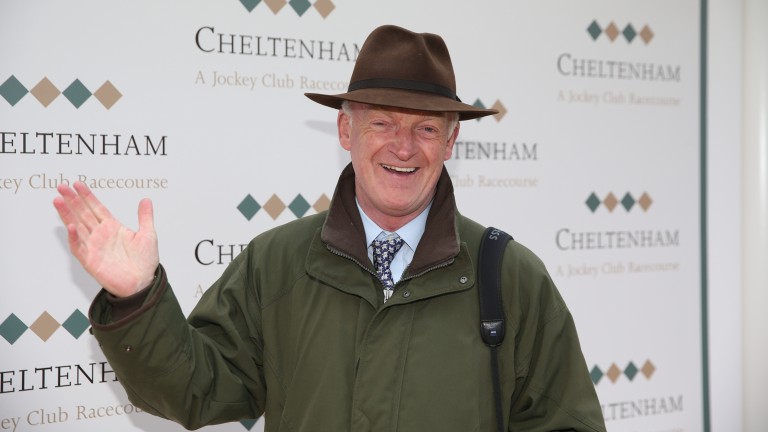 Willie Mullins: needs more than one hand to count his runners in the Ballymore Handicap Hurdle
John Grossick (racingpost.com/photos)
1 of 1
By Brian Sheerin 5:52PM, APR 28 2018

Gordon Elliott set a trainers' record for the number of runners in one race when saddling 13 in this year’s Irish Grand National – a race he won with General Principle – but Willie Mullins is set to better that in this €100,000 contest, as he is responsible for 14 of the 25 guaranteed starters, plus two of the reserves.

Mullins has taken five of the past nine runnings of this race and the picks of his 14 could be Karalee, the mount of Paul Townend, Low Sun, turning out quickly after running fourth here on Tuesday, classy dual-purpose horse Max Dynamite and Meri Devie.

The green-and-gold hoops of JP McManus have have been carried to victory twice in this in the past three years, including with Anibale Fly in 2016, and the powerful owner has a typically strong hand again with Spades Are Trumps, Early Doors and Dream Berry.

Any faint title hopes may have slipped away by the time this 2m4f handicap hurdle is run for Gordon Elliott, but he is well represented with Yaha Fizz, Flawless Escape and Diamond King.

Joe Murphy, trainer of Swamp Fox
It's his first run of the year and, if the ground was better, we'd be hopeful of a better run. There aren't too many other places to go and, while I think he's too high in the handicap to make an impact, I'm looking forward to getting him back. You have to start somewhere, but I think we're up against it.

Joseph O’Brien, trainer of Early Doors
He’s in very good form and ran well in the Martin Pipe Handicap Hurdle to finish third. We think the conditions of this race will suit him very well and we're expecting him to run well.

Matthew Smith, trainer of Prince Garyantle
We had him as fit as he could be for his first run back for a while when he won here on Wednesday and, while I wouldn’t say we were expecting him to win, he definitely didn’t surprise us. He’s got 12lb for that win and this is going to be a tougher race, but he’s been in good form out in the paddocks since his win and we said we’d take our chance.

Gavin Cromwell, trainer of Spade Are Trumps
He disappointed us at Cork last time, but we're putting that down to the very bad ground. He seems in good form at home and we're hoping for a nice performance.

Tom Gibney, trainer of Agent Boru
He was good at Fairyhouse and we’re just delighted to get him into this race. The trip and the ground won’t be a problem and we’re hopeful of a good run.

FIRST PUBLISHED 6:29PM, APR 27 2018
He was very good at Fairyhouse and we’re just delighted to get him into this. The trip and the ground won’t be a problem for him and we’re hopeful