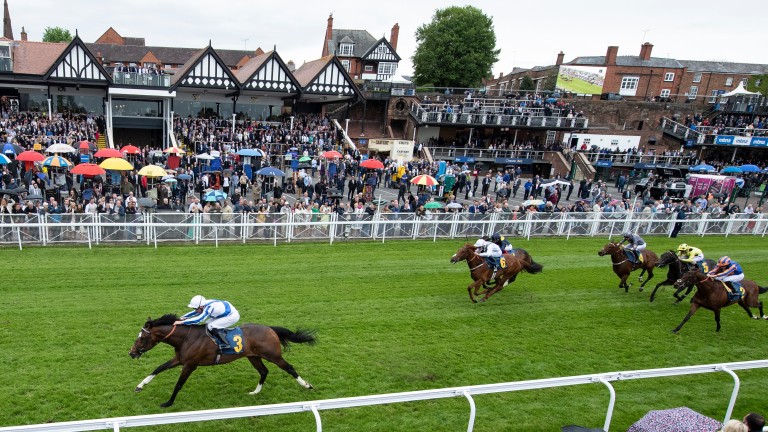 Chief Ironside (Kieran Shoemark) scores in style at Chester in May
Edward Whitaker
1 of 1
By Graham Dench UPDATED 7:23PM, JUL 12 2018

William Jarvis is hoping the handicapper has yet to get full hold of his progressive Chief Ironside, who bids to give the stable its biggest win in a decade.

Jarvis has been down on numbers since Gravitation won a Group 3 at Goodwood in 2008, but the stable is enjoying a renaissance this season and Clive Washbourn's colt is certainly playing his part, alongside dual Listed sprint winner Mrs Gallagher.

Chief Ironside's recent course-and-distance win followed a cracking effort at Newbury and he appears still to be on the upgrade.

Jarvis said: "I think he's pretty useful. He needs another personal best, as he's up 7lb for his win last time, but that's course-and-distance form, which is encouraging, and he seems to have come out of the race pretty well and so we're hopeful of a big run."

Chief Ironside's regular rider Kieran Shoemark is out of action, but replacement Jamie Spencer is already familiar with him.

Jarvis said: "It's a shame Kieran can't ride after that horrible fall at Lingfield but Jamie did ride Chief Ironside work as a two-year-old so he does know him."

Wissahickon and Beringer renew rivalry after dominating the finish of a similar race at York last time, where they looked well ahead of the handicapper in pulling six lengths clear of the rest.

On that occasion Wissahickon had the better of things by three-quarters of a length, but Beringer enjoys a 2lb pull and so technically has every chance of exacting revenge.

Mark Johnston saddles Communique and Poet's Prince in a bid to win this for a fifth time in six years. The pair were first and second, ahead of Chief Ironside and Dukhan, in Newbury's London Gold Cup on Lockinge day. 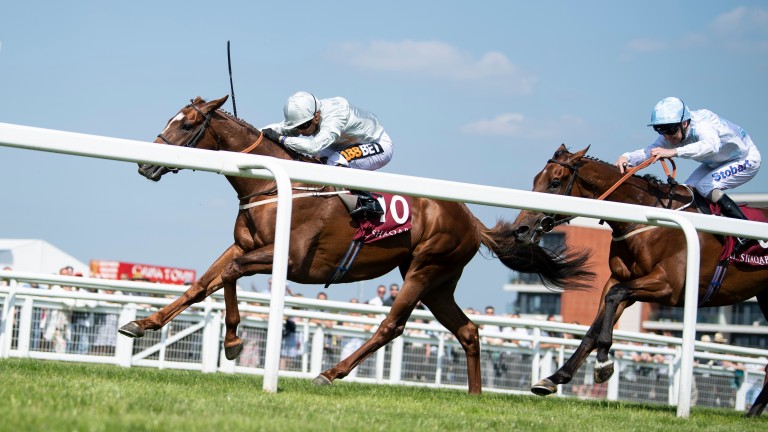 They occupied the last two places behind Wissahickon at York, but have every chance if bouncing back.

John Gosden, trainer of Wissahickon
He won well at York but he's leapt up the weights because of it. He handles fast ground, should enjoy the trip and has a progressive profile.

Alan King, trainer of Beringer
Beringer was thwarted in his hat-trick bid by Wissahickon at York but travelled like a dream and the handicapper was impressed and put him up 5lb. He now gets a 2lb weight pull with the winner so again ought to be in the thick of it.

Ed Vaughan, trainer of Desert Wind
He ran a great race in the Britannia, where we knew the mile would be on the sharp side, and he'll appreciate stepping back up in trip. I've been pleased with him and he goes well on fast ground.

Charlie Johnston, assistant to father Mark, trainer of Poet's Prince and Communique
This has been their target since they finished first and second at Newbury in the London Gold Cup. It's slightly frustrating that they come into the race on the back of lesser efforts, but if they come back to the form of their Newbury runs they'll have every chance. There will be no excuses over the trip on this ground; it's perfect for them.

Jack Channon, assistant to father Mick, trainer of The Night Porter
All he’s done this season is progress. He really has gone from strength to strength and the trip and ground look perfect for him. He deserves to step up in grade to a race like this and his work’s been good too.

FIRST PUBLISHED 6:00PM, JUL 12 2018
He needs another personal best as he's up 7lb for his win last time, but that's course-and-distance form and he seems to have come out of it well

Can any rivals throw down a challenge to 'enormously exciting' Lady Bowthorpe? The power of Love is set to be tested as Frankie's Lord seeks Royal Ascot repeat Jarvis yard in top form as stable star Lady Bowthorpe's Ascot date nears