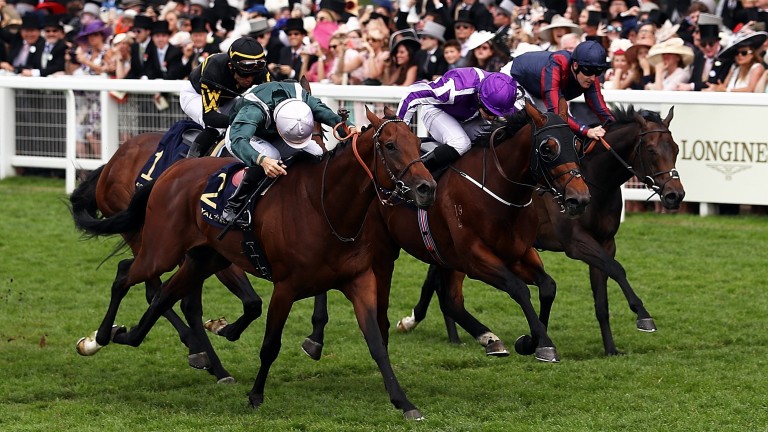 For a fleeting moment trainer Stephane Wattel thought City Light had provided him with a breakthrough Group 1 win after three decades with a licence.

But the judge’s call revealed the ex-Australian Merchant Navy had nosed out the French raider in the Diamond Jubilee Stakes, and no matter how many times Wattel watched the replay the result stayed the same.

As Christophe Soumillon went to weigh in, he and the trainer put a consolatory arm around each other, sharing the same feelings of pride, disappointment and that touch of jealousy which comes with finishing second.

“He ran a great race,” Wattel said. “I was a little worried before the race as he's not always the best and not always the easiest, but it was a great effort and I’m very happy for his owners and breeders as this was a great opportunity for us.”

Having delivered City Light to land the All-Weather Sprint Championship on Good Friday at Lingfield and then a Group 3 at Longchamp, Wattel is hoping the four-year-old can make his Group 1 breakthrough with the Prix Maurice de Gheest the aim.

He said: “The natural target is the Prix Maurice de Gheest but we have to make sure he's in the same condition as today.

“Lingfield was a great moment as it was my first winner in England. I thought for a moment I was going to have my first Group 1 winner, but I'll have to wait. I’ve waited for 30 years - I hope I don’t have to wait 30 more!”

Last year’s Diamond Jubilee winner The Tin Man could also be in line for a shot at the Prix Maurice de Gheest, after his fourth place here, while Commonwealth Cup second Sands Of Mali has also been earmarked for what could be a terrific summer sprint.

In an international finish to the Diamond Jubilee, it was the US-trained Bound For Nowhere who filled third place, building on his fourth in the Commonwealth Cup last year.

Trainer Wesley Ward said: “I didn’t expect him to be at the front but I guess there was nothing that could go fast enough. To step up on what he’s done before and be third in a Group 1 at Royal Ascot is fantastic. I’m real proud of him.”

FIRST PUBLISHED 6:17PM, JUN 23 2018
I thought for a moment that I was going to have my first Group 1 winner but I will have to wait

'They could have waited. They just didn’t' - furious De Sousa blasts starter Love brightens the week for Aidan O'Brien but draw-bias punters are wrong-footed Duchess of Cornwall's prominence could offer clues to the future of royal racing What heights can Love conquer now? We assess her comeback victory at Royal Ascot 'Any rain should help his cause' - the trainer who hopes the storms arrive Watch now: live Royal Ascot preview show featuring Tom Segal and Paul Kealy