Elliott eyes National targets for Cause Of Causes and Tiger Roll 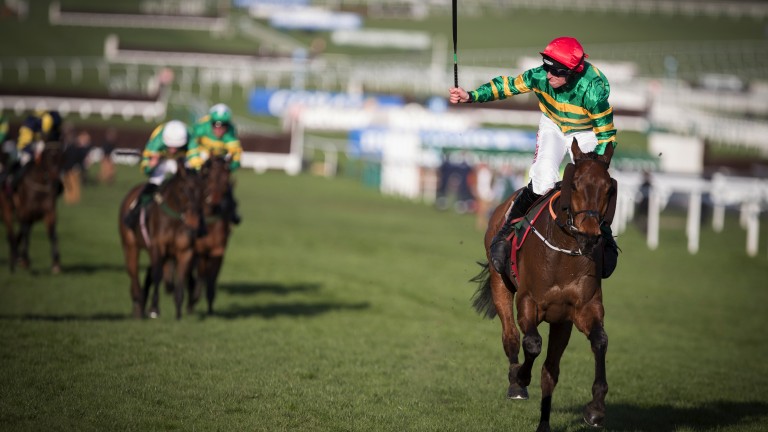 Cause Of Causes: cross-country winner is bound for Aintree
Patrick McCann (racingpost.com/photos)
1 of 1
By Tony O'Hehir 9:00AM, MAR 20 2017

Cause Of Causes and Tiger Roll, two of Gordon Elliott's six winners at the Cheltenham Festival, are likely to be on Grand National duty when they next appear on the racecourse.

Winner of the Glenfarclas Cross-Country Chase on Wednesday, Cause Of Causes, who was scoring at the festival for the third consecutive year, is entered for the Randox Health Grand National and the BoyleSports Irish Grand National and, according to Elliott, Aintree is the preferred target.

Elliott, leading trainer at Cheltenham for the first time, said yesterday: "We're leaning towards Aintree although we'll wait and see how he has come out of Cheltenham."

Cause Of Causes finished eighth behind Many Clouds in the Grand National two years ago.

Tiger Roll, winner of the JT McNamara National Hunt Chase under Lisa O'Neill on Tuesday, will be part of Elliott's team for the Irish Grand National at Fairyhouse on April 17.

Elliott has made 28 entries for the Easter Monday event which will be the most valuable jumps race run in Ireland with a first prize of €290,000 and overall prize-money of €500,000.

The contest is expected to be crucial in the race between Elliott and Willie Mullins for the trainers' title, and Elliott said: "We're going to run as many as we can and Tiger Roll will be one of them."

Noel O'Brien, Ireland's senior handicapper, has given Tiger Roll a 5lb penalty for the race which will guarantee the seven-year-old a place in the 30-runner line-up. Bit Of A Skite in 1983 and Butler's Cabin in 2007 both landed the National Hunt Chase and the Irish Grand National in the same season.

During a memorable week for Elliott at Cheltenham, the highly-regarded Death Duty was one horse who ran below expectations, parting company with Bryan Cooper at the final flight when well beaten in the Albert Bartlett Novices' Hurdle for which he started favourite.

"Death Duty was struggling at the top of the hill and we don't know why he ran so disappointingly. He seems fine but we'll wait and see how he is during the week before making any decisions about where he might go next," Elliott said.