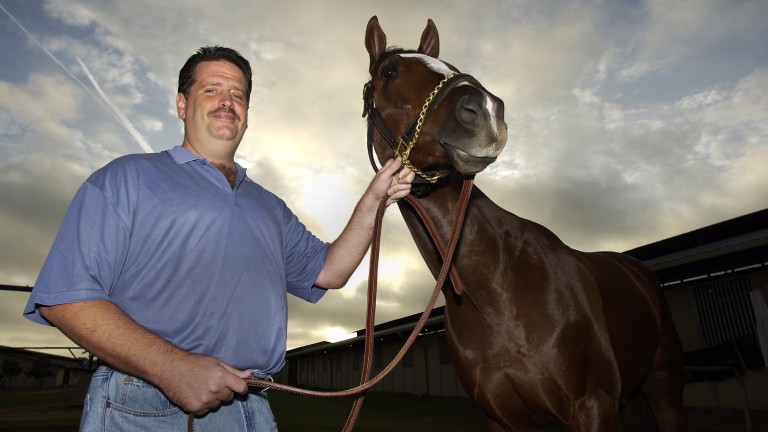 Dale Romans with Kitten's Joy, one of his most famous charges
Edward Whitaker
1 of 1
By Bloodhorse Staff 4:19PM, JAN 7 2019

"This filly ran a beautiful race," Romans said. "Bob Baron [owner] is more than a client. He's also a very good friend. We've been together a long time. I'm glad it was him who owned winner 2,000."

A 52-year-old native of Kentucky, Romans took out his trainer's licence at 18. He spent the winter of 1986 working as an assistant to the late Woody Stephens at Hialeah Park and notched his first winner on his own February 15, 1987, with Miss Mindy at Turfway Park.

Romans won the Preakness Stakes with Shackleford in 2011 and has also sent out four placed runners in the Belmont Stakes and two in the Kentucky Derby.

He can boast three victories in the Breeders' Cup, the most recent coming with Little Mike in the 2012 Turf that helped clinch that year's Eclipse Award.

During his championship season, Romans won 125 races, 20 graded stakes, and a career-high $11,834,249 in earnings. Nine of his stakes victories came in Grade 1 events – three by Little Mike and two each from Shackleford, Tapitsfly and Dullahan.

Romans' most significant international success came with Roses In May, who won the Dubai World Cup in 2005.