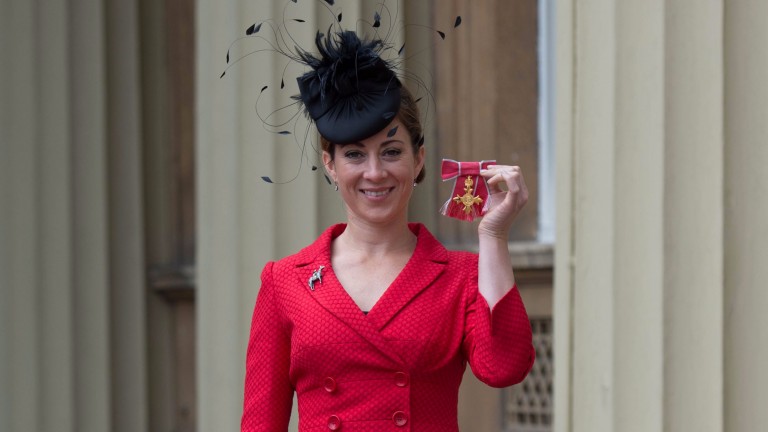 Hayley Turner: received Officer of the Order of the British Empire (OBE) for services to horse racing
Stefan Rousseau
1 of 1
By Jon Lees 9:35AM, OCT 26 2016

Hayley Turner on Tuesday paid tribute to the part the Queen has played in raising the profile of women jockeys on the day she received her OBE from the monarch.

Turner was joined at Buckingham Palace by mother Kate, sisters Connie and Gemma, and grandmother Iris Garmory for the ceremony, which recognised her award for services to racing.

"It was amazing," said Turner. "The whole day has been brilliant because my nana, mum and two sisters came with me as well. Getting them all in London at the same time was a joy in itself, and to have Her Majesty The Queen doing it was a big bonus.

"We had a brief chat. She asked me about how I found the Shergar Cup this year and asked about my mum, who has rehomed some of her racehorses."

Turner, who was the first woman in Britain to ride a Group 1 winner outright and also partner 100 winners in a year, in 2008, rode four winners for the Queen.

She added: "Her Majesty giving me rides at the point in my career that she did helped the girls in racing, because other owners and trainers were sure to follow suit.

"As much as I've had a lot of success, it doesn't happen without people like the Queen giving opportunities along the way."

FIRST PUBLISHED 5:06PM, OCT 25 2016
Her Majesty giving me rides at the point in my career that she did helped the girls in racing, because other owners and trainers were sure to follow suit