Tourist has a perfect trip this time and turns the tables 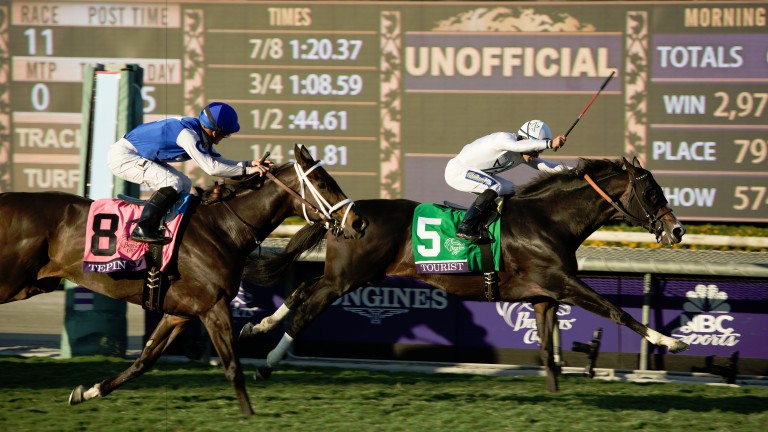 Limato got the mile trip but at the end of a long season was unable to put his best foot forward at Santa Anita, Henry Candy said after watching his stable star finish sixth in the Mile.

Tourist landed something of an upset to deny Tepin from securing back-to-back wins with a late surge, while Aidan O'Brien's trio all finished down the field, as did the Charlie Hills-trained Dutch Connection to complete a disappointing contest for the European party.

"He was a little bit free early on but there are no excuses," said Candy. "I just think it's late enough in the year for him. It was nothing to do with the trip. He wasn't going to win from two out. They don't last forever. Not many of my horses function in November."

The Lambourn trainer was far from downbeat about the result, however, saying about his first American runner: "This is fantastic. I wouldn't have missed it for anything."

Tepin came into the race on the back of a surprise defeat but returned to something like her best, going down to Tourist in a time just 0.02 seconds off the track record.

Her trainer Mark Casse appeared to rule out retirement for the supermare and trips to Dubai and potentially to Royal Ascot, where she won the Queen Anne this summer, could be on the agenda.

"I'm proud of her," the trainer said. "She's been good for so long. We came up a touch short but can leave with our heads held high. She's been unbelievable for us.

"I wouldn't bet on her being retired. I thought for the last two or three weeks she has been training as good as she ever has."

Tourist enjoyed a charmed life on the inside in a furiously run race and held off Tepin by half a length to give trainer Bill Mott a tenth Breeders' Cup win.

"I looked at the horses in the field and thought this has to be one of the most competitive races of the day," he said.

"A good trip is imperative and he had a good trip on the inside, saving ground."

The O'Brien-trained trio of Cougar Mountain, Hit It A Bomb and Alice Springs finished eighth, ninth and tenth.

"Alice Spring's has had a long, hard season so we'll freshen her up and hopefully look forward to her next season," said O'Brien. "Hit It A Bomb ran well closing down from the back and Cougar Mountain has also run a good race."

Charlie Hills, trainer of 12th-placed Dutch Connection, said: "He broke well enough and was in a good enough position behind Tepin, he travelled well enough down the back. He's a big horse and probably wasn't ideally suited by the track."

FIRST PUBLISHED 12:26AM, NOV 6 2016
I thought they were going too quick early, they were really flying. I just let him be happy where he was, saving ground, and took it from there