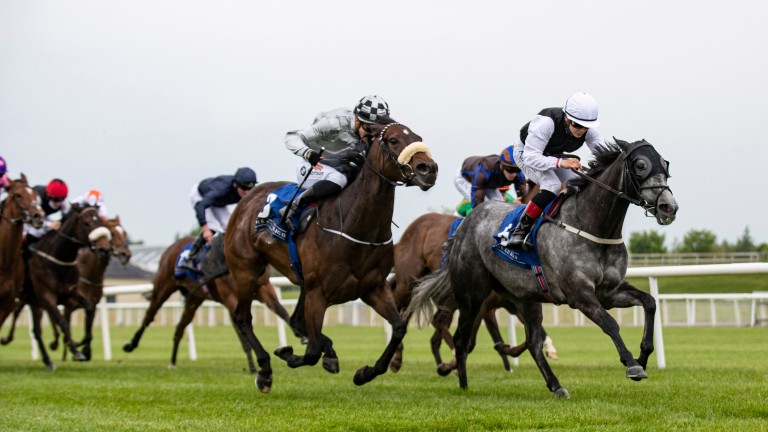 Trainer Paddy Twomey saddled the first Group winner of his career when the ultra-tough Sonaiyla overcame some unexpected obstacles to land the feature Group 3 Ballyogan Stakes under Ronan Whelan.

The daughter of Dark Angel was almost wiped out coming out of the stalls but recovered to get into a good position and in the final furlong showed a terrific attitude to see off the persistent Romantic Proposal by half a length.

"She's a great filly," said Twomey. "She's in better form than ever this year. She had a mix-up at the start last time here too in the Greenlands Stakes where she did great work at the finish from an unpromising position. Today she came there and showed us what she had been showing throughout the spring.

"She has won her Group 3 and we can step her up in grade now. I think she has a preference for this track as she has rarely been out of the frame here."

The level of juvenile talent in Irish yards was well advertised in the opening two races on the card.

First to strike was Aidan O'Brien in the opening 7f maiden, won impressively by his newcomer Point Lonsdale.

The son of Australia strode clear up the hill in the final furlong under Seamie Heffernan to score by five and a half lengths. A crack at the Chesham Stakes at Royal Ascot is now in the offing.

Ascot is not on the agenda for the Ger Lyons-trained Dr Zempf, who quickened up nicely under Colin Keane to land the 6f winners' race.

FIRST PUBLISHED 6:35PM, JUN 2 2021
She has won her Group 3 and we can step up in grade now. I think she has great preference for this track, she has rarely been out of the frame here

Paddocks could beckon for Astadash after impressive Group 3 success Where was Dettori? Where were the Brits? Irish Champions Weekend felt too Irish Interference rules don't give jockeys or stewards enough credit Think 'trainer form' and everything becomes clear after hectic weekend's action How did the Moyglare and National Stakes impact next year's Classics? Bolshoi Ballet knocked out of Niel by stewards as Deep Bond powers home in Foy