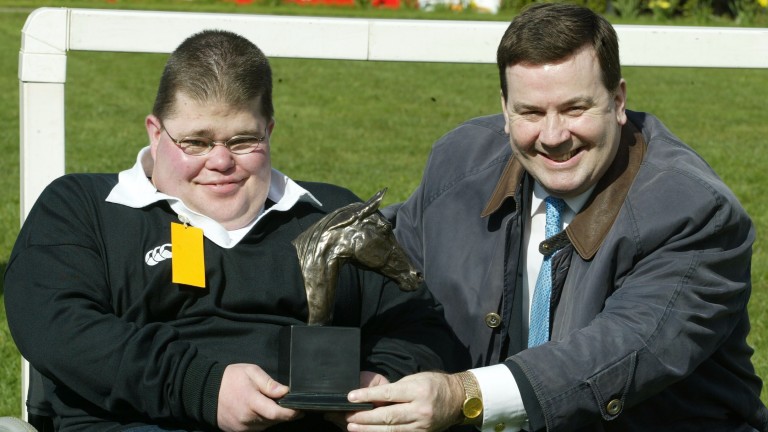 Nick Coen (left): "He would have attended every race meeting at Leopardstown and we will miss his smile more than anything"
MSI Caroline Norris 50% NO PRIVA
1 of 1
By Brian Sheerin 4:26PM, JAN 31 2017

Leopardstown racecourse manager Pat Keogh has paid a heartfelt tribute to regular Irish racegoer and racing fanatic Nick Coen, who passed away peacefully in his sleep on Sunday evening.

Coen, 33, was an honorary member of Leopardstown racecourse and rarely missed a meeting and Keogh admits his presence will be sorely missed at the track.

"He was a part of the fabric here at Leopardstown racecourse and he was actually here on Sunday which makes the news all the more shocking," Keogh said.

"Nick would have attended every race meeting at Leopardstown and we will miss his smile more than anything.

"He was a very knowledgeable fellow and not only was he a client of Leopardstown but he was also a valuable friend. You could always bounce an idea off Nick and we will miss him greatly. I would like to offer my sympathies to his family."

Coen was also a huge follower of bloodstock and regularly attended the sales. After visiting the likes of Free Eagle, Dragon Pulse and Invincible Spirit at the Irish National Stud last year, he was gifted specially designed wheels that featured a picture of Free Eagle on the design for his wheelchair.

CEO of The Irish National Stud John Osborne said: "Nick was a great enthusiast for racing and we are proud that he became our ambassador. We will miss his positivity."

Champion amateur rider Patrick Mullins also offered his condolences, and said: "I knew Nick well and I was very sad to hear of his passing. He was one of the great characters of the game and I will miss passing him outside the weighroom at Leopardstown."