Torn between Natalie and some cracking action on the course 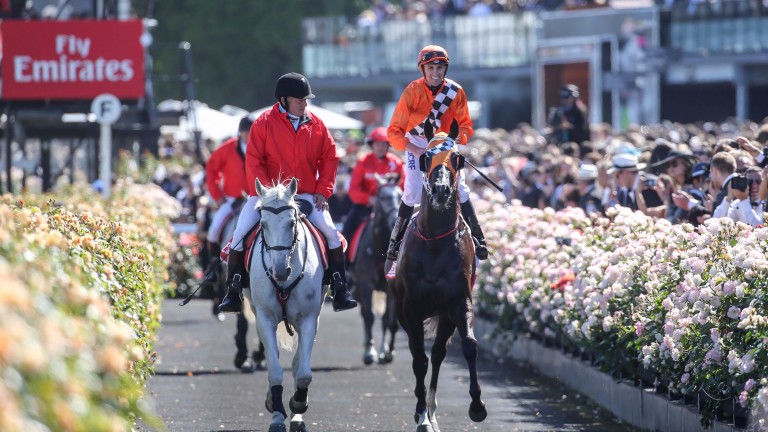 The roses at Flemington are in full bloom as Ace High returns after winning the Victoria Derby
GROSSICK RACING PHOTOGRAPHY 0771
1 of 1
1:37PM, NOV 4 2017

It is Victoria Derby day at Flemington and the theme is black and white. The style sublime. The racing remarkable. The occasion overwhelming.

Remember the first time you saw an episode of Breaking Bad? Good, wasn't it? A first raceday experience at Flemington is something like that. You have heard all about it but you never really believe all you hear. It is all true. Flemington is fabulous.

The members' stand has been knocked down and is in the middle of a multi-million-dollar redevelopment. If you couldn't see it or didn't hear about it, you would never know. They improvise impressively in Australia. The Curragh could certainly learn a thing or two. They have managed to fit in 87,526 people.

Everywhere is so easy on the eye. Thousands of roses were planted months ago with the plan of blooming in this very week and they have arrived right on cue. This place is postcard pretty.

It would be unprofessional not to take a full tour, and a full tour includes a visit to a bar. The James Boag's terrace after the winning post is basking in sunshine and looks the perfect place to enjoy an ice-cool bottle of Furphy. Everywhere looks better after a beer.

Where to next? I'm torn. Natalie Imbruglia, my first crush, is on stage in the Birdcage but the Group 1 Coolmore Stud Stakes is on in a few minutes. Supposedly, Invincible Star is the quickest thing we've seen since Usain Bolt and must be backed.

Hold on a second, is that Usain Bolt himself? It is, you know. The world's fastest man is even here. He is not as fast in reality as he is on television, though. I've been staring at him for the last ten minutes and he's barely moved. He's in some shape in a slick grey suit. Gym session in the morning for me.

Imbruglia has managed to maintain her beauty after all these years. It is the 20th anniversary of her hit single Torn but she still looks and sounds the same.

Invincible Star still looks as good as she did at Caulfield last month for five of the six furlongs in the Coolmore, but she is gunned down late by Merchant Navy. It is crushing.

Rich Ricci probably felt crushed for a couple of hours after Cismontane landed the Lexus Stakes and won a ballot-exempt entry to the Melbourne Cup. That left Thomas Hobson out in the cold, but the door opened again when Jon Snow was ruled out due to lameness. Phew. 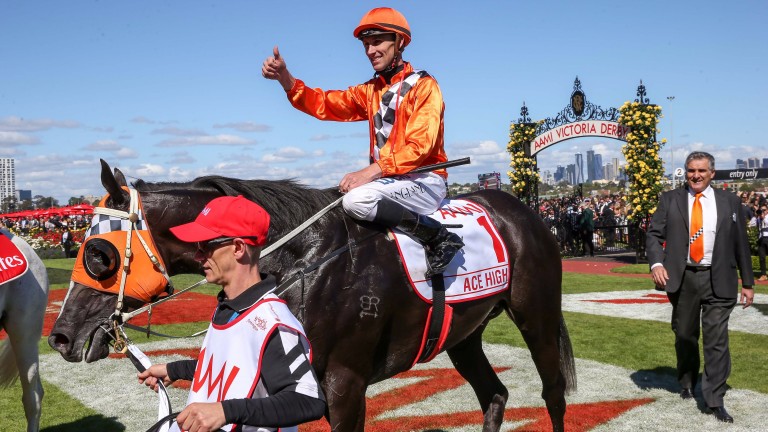 We do not yet know the winner of the 2017 Melbourne Cup, but we might know the 2018 winner already. Ace High. Remember the name. You might thank me in 12 months' time.

Ace High was much the best in the Victoria Derby, digging himself out of a substantial hole midway through the race to land the A$1.5 million (£878,000/€989,000) event in stunning style. He's a star stayer in the making and one to watch.

Udyta Clarke is always worth watching. The 70-year-old trainer treats her horses like her own children and Rich Charm is her baby.

"I've absolutely no idea how Chris Waller copes when Winx runs," she says. "My stomach is churning and I just wanted to bring him home. I didn't want to run. The pressure was too much.

"He's only a little pony and I was watching all these giants walking around behind him and I just wanted to take him home."

It is lucky Udyta didn't take him home. Rich Charm changes gear impressively down the outside under Patrick Moloney to take the concluding Group 2. He was favourite and the place erupts.

Derby day has whetted the appetite and left us licking our lips wanting more. Pity there is no big race coming up at Flemington soon. Oh wait.