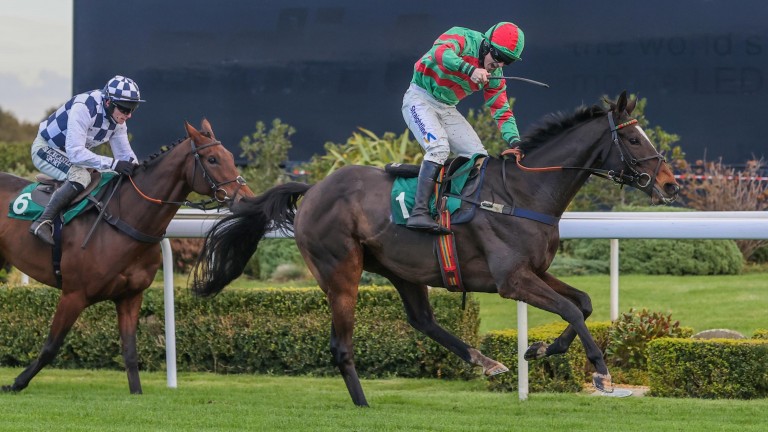 Danny McMenamin punches the air as he crosses the line aboard Nuts Well
John Grossick (racingpost.com/photos)
1 of 1
By Sam Hendry UPDATED 11:19AM, OCT 26 2020

There was a surprise in the Grade 2 Monet's Garden Old Roan Chase at Aintree as 18-1 shot Nuts Well defied top weight and roared to victory under Danny McMenamin, who punched the air with delight crossing the line.

Clondaw Castle jumped into the lead at the last but was caught by the Ann Hamilton-trained Nuts Well on the run to the finish, with the 16-5 favourite Itchy Feet back in third.

For 68-year-old Hamilton and her 73-year-old husband-owner Ian, cattle farmers from Northumberland, it’s an afternoon that will live long in the memory as their nine-year-old star provided them with a first win at Graded level. 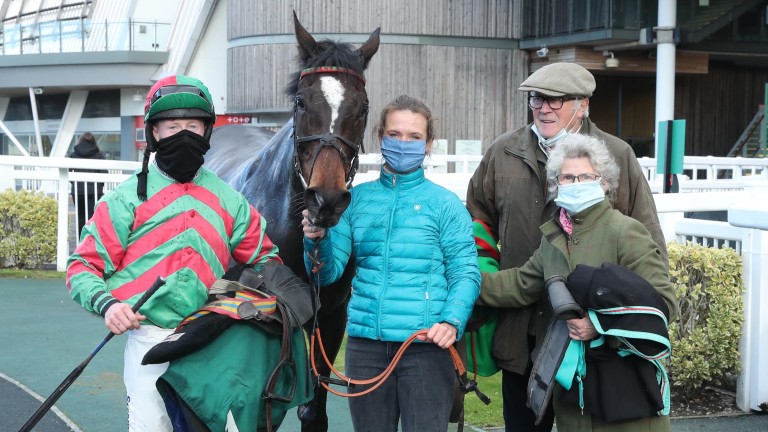 "It means the world to win a race like that and it was so exciting, seeing him coming home," she said. "He's been such a good servant to us and we didn't think he could do it carrying all that weight – plus he wants better ground.

"We've just got six horses and this our biggest win. It's special being here at Aintree."

Robbie Power took a bad fall when unseated by second favourite Vision Des Flos at the second fence, which was bypassed next time around as he was tended to by paramedics.

He was stood down for the day and is understood to have taken a bang to the knee.

Nuts Well was ridden patiently by up-and-coming rider McMenamin and provided him with a second Graded win after his victory aboard Nietzsche in the Greatwood Hurdle in 2018.

Tom George-trained Clondaw Castle ran a big race at odds of 14-1 under Jonathan Burke and looked the likeliest winner after jumping the last, but couldn’t hold on and finished a length and a half behind the winner.

Backers of Itchy Feet, who provided his trainer Olly Murphy with a first Grade 1 win in the Scilly Isles Novices’ Chase in February, shaped as if he needed the run on his reappearance a further length behind.

Paddy Power gave Nuts Well an initial quote of 33-1 for the Ryanair Chase.

FIRST PUBLISHED 2:16PM, OCT 25 2020
It means the world to win a race like that and it was so exciting, seeing him coming home