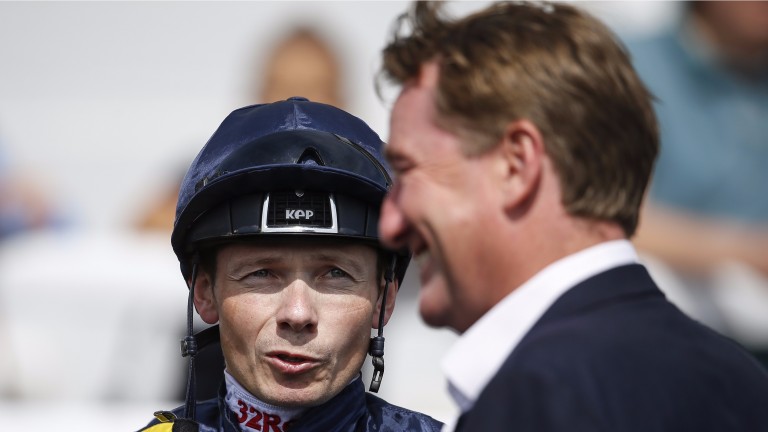 Jamie Spencer and David Simcock: good relationship on and off the track
Alan Crowhurst
1 of 1
By Mark Scully 1:00PM, AUG 13 2017

Trainers David Simcock, Michael Bell and Kevin Ryan were among those to pay tribute to Jamie Spencer after the jockey partnered his 2,000th British Flat winner at Ascot on Saturday.

Spencer won the opening race of the Shergar Cup on Stake Acclaim to reach the milestone and was received glowing praise from leading figures in the sport.

Simcock said: "I've known him since I first came to Newmarket when he was riding as stable jockey to Luca [Cumani].

"I've always enjoyed his company and found him to be extremely professional. He's very hard-working, which a lot of people probably don't see, and he's always there for me when I need him. He's a nice person to turn to when you need a favour.

"He's a wonderful judge of pace too and has that rare quality of being able to win a race many others wouldn't be able to."

Reflecting on the triumphs the two have enjoyed together, Simcock nominated Spencer's thrilling winning effort aboard Trade Storm in the Woodbine Mile of 2014 as his personal favourite.

"When Jamie had his split from Qatar Racing in 2014, he won the Woodbine Mile on Trade Storm shortly after, which was very special," Simcock recalled.

"He had a great affinity with the horse, having won the Zabeel Mile on him previously, and it was a very satisfying win. It was a daring ride that a lot of jockeys wouldn't have been able to pull off."

The pair also teamed up for Group and Grade 1 glory with Red Evie and Wigmore Hall, as well as enjoying notable successes with the popular Big Orange.

"Jamie rode his first winner for me on a horse called Red Carpet at Chepstow for me a very long time ago [July 2000] and we've had some great times since with the likes of Sariska, Wigmore Hall and Red Evie," said Bell. 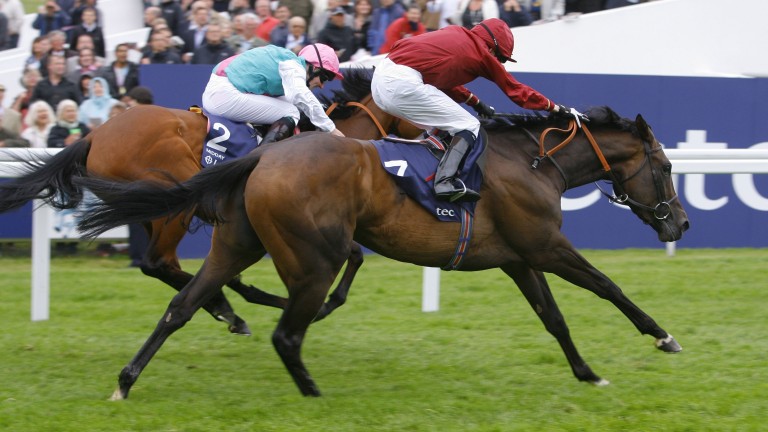 "Sariska's Oaks at Epsom was a fantastic race fought out by two great fillies. I remember being disappointed she'd won only by a head at the time but of course Midday turned out to be a superstar. There'll hopefully be many more fantastic times to come yet.

"I get on very well with Jamie personally outside of racing and he's a wonderful horseman who's bred into the game. It's a famous saying but he does have particularly good hands – you very rarely see a horse pull with him."

Ryan is another to have supplied Spencer with big-race winners and, like Simcock and Bell, had not only praise for his skills on the track but compliments for him personally outside the sport.

"Jamie has ridden for me from day one and he's a fantastic rider and a great friend," said Ryan. "It's a great achievement and he's got many more years and winners in him.

"Jamie has a great brain and can ride a race from anywhere. I've seen him holding horses up but he's also a brilliant rider from the front, he can judge pace, slow a race up and kick at the right time."

Ryan added: "He's absolutely fantastic with owners, he gives them a lot of time, he realises they pay the bills, and he gives you great feedback about a horse. He's just a complete all-rounder."

FIRST PUBLISHED 1:00PM, AUG 13 2017
He's a wonderful judge of pace and has that rare quality of being able to win a race that many other wouldn't be able to